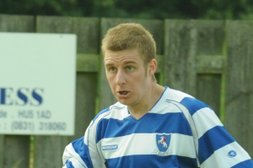 Photo: Chris Spinks who had a major role in Hall Road's winning goal

IN a game of two halves, it was Hall Road Rangers who emerged victorious, to end league leaders Penistone Church's epic 29 game unbeaten league run last night.
With their hosts not suffering a single league defeat since Dave Ricardo, and Bill Gill's Selby Town side in January recorded a 5-4 victory, the duo returned to The Memorial Ground to haunt the NCEL First Division pace-setters once more.
In an exciting fixture where the game could of swung either way, it was debutant Gareth Owen's deflection off Chris Spinks arrowing drive which secured the spoils with just seven minutes remaining.
The win sees Rangers move onto 33 points, as they surpass last season's points tally with over half the season remaining, and get back in the hunt for a top six place.
Rangers management duo Ricardo and Gill will be extra delighted with the fact they recorded the victory without the likes of skipper Ash Dexter, influential midfielder Ash Allanson and also the likes of Alex Sherwood and Brad Ricketts.
They were in a position however to welcome back Josh Batty and Phil Dobson who missed the weekend Vase home reversal at the hands of Bottesford Town due to been ineligible.
James Whittingham returned at left back at the expense of an unlucky Jack Binns, whilst James Piercy slotted in at centre-half alongside Sam Belcher with Gareth Owen, a capture earlier in the day from Bridlington Town, made his debut.
There was a first start in nearly two months for Rangers striker Jamie Reeson, a reward for his fine form since returning from injury as he spearheaded the Rangers attack.
Penistone meanwhile included the prolific goal-scoring pair of Dale Kelly and Nathan Joynes in their side, a double-act that have so far contributed 33 goals between them.
At a cold, open Memorial Ground, Penistone showed why they have proved impregnable in their league campaign so far by starting the quicker of the two sides.
Although dealt with well by the Rangers defence, the hosts won two quickfire corners within the first 70 seconds whilst Piercy had to be alert to clear a dangerous looking cross by Joynes on six minutes
Although second best for most of the first half in terms of possession and territory, Rangers appeared comfortable to soak up the pressure inserted on them by the league leaders, Reeson did well on the edge of the box though with eleven minutes on the clock to register Rangers first real foray.
The striker, weaving his way to the left edge of the penalty area before cutting inside and testing Church keeper Adam Rhodes, and with the in-form Chris Spinks lurking on the rebound, Rhodes bravely gathered Reeson's stinging effort at the second attempt in the greasy conditions.
Rangers keeper Phil Dobson was called into action as Penistone enjoyed a sustained period of pressure on 15 minutes.
Kelly and Joynes linked up nicely and with the latter in on goal, Dobson came off his line to save at the near post with his legs for another corner.
Kelly then powerfully glanced the resulting corner wide of the far post whilst right-back Tom Jones had his effort bravely deflected over by a Hall Road defender.
With Penistone constantly knocking the ball around at a high tempo the visitors dealt with that particular threat well, but crosses from wide areas caused some early issues and Piercy again had to be alert to head out for a corner at the near post with a Penistone attacker in close proximity.
The best chance of the half though fell to the hosts on 31 minutes.
With the ball ping-ponging from left to right on the edge of the Hall Road penalty area the ball broke to right sided midfielder Duncan Richards who lashed his powerful effort, first time on the run, narrowly over the crossbar.
Hall Road managed to reach the half-time interval level, having dug in deep to thwart Penistone and frustrate the league leaders, whilst also showing fleeting attacking moments themselves

It was maybe expected the second half would follow the same pattern as the first, however Hall Road's gameplan began to come to fruition as they edged the second period.
They spent the early moments of the second half on the front foot, as Josh Batty and Spinks began to see more of the ball.
Batty headed narrowly wide at the far post following a deep penetrating Danny Norton cross whilst Spinks drove a long range effort straight at Rhodes.
Rangers continued to push, when Batty again, similar to Spinks earlier effort, found Rhodes from distance all in the first five minutes of the restart.
The closest Rangers came all game so far, was in the 58th minute, when again from distance Spinks picked the bottom left corner from 25 yards just left of centre, and with his effort destined for the bottom corner Rhodes somehow palmed the ball round the post.
A potentially match winning moment though came at the other end from Hall Road keeper Phil Dobson just after the hour.
A neat Cruyff turn by Danny Barlow on the edge of the area, led to a curling effort which was bound for Dobson's top left corner, however the 40 year old keeper flung himself to claw the ball out of danger for a corner, a save which drew applause from both sets of supporters.
The game was played in excellent spirit, competitive throughout with both sides fully committed.
Penistone collected the only yellow card of the game on 68 minutes when after been rolled Jones mistimed his challenge to abruptly end a Rangers attack on the left flank.
With fifteen minutes remaining, all three results were possible, the tireless running of Josh Batty saw him replaced by Jack Binns, a sign Rangers would maybe have been the happier team with a point but they were unfortunate not to take the lead on 77 minutes, when it was adjudged an effort had not crossed the line, despite ferocious appeals from the visitors it had.
Having completed more then 80 minutes, another grafter, Jamie Reeson was replaced by Nathan Perks, who was making his second appearance since joining from Selby Town last week.
It was soon after this Rangers grabbed the all important winning goal, in a reporters worse nightmare.
Hall Road leading scorer Chris Spinks cut in from the right all to easily and fired an angled strike goalbound and with a cluster of bodies just inside the area the shot deflected off what was later clarified as new signing Gareth Owen sending the ball looping past a wrong-footed Rhodes and into the net.
A siege to the Hall Road goal was maybe expected, but despite a few nervy moments the Rangers rearguard held firm to record their fourth clean sheet of the season, as well as continuing a run which has seen them score in each league game so far this season.
The hosts made a double change on 85 minutes with Scott Whittington and Andy Ring replacing Jimmy Stafford and Duncan Richards whilst Ricardo sacrificed Chris Spinks for central defender Dane Mortimer.
Although a nervy final few minutes followed the game will maybe unfortunately be remembered for a double sending off four minutes into injury time
As a challenge to a 50-50 ball ended in a mass brawl as frustration boiled over.
After the melee subsided referee Christopher Darling sent Penistone down to ten men whilst he also adjudged Rangers midfielder Tom Bennett to have been guilty of violent conduct, showing the midfielder a straight red also, which will see him miss three matches.
Darling then blew time on the match straight after as Hall Road inflicted Penistone Church's first defeat since January, in what was an epic 29 game unbeaten run to boost their own chances of reaching the top six.

VIEW FROM THE PRESS-BOX – By Neil Winsor
An entertaining game between two sides that will be there or thereabouts.
Penistone were the better side as an attacking force in the first half and showed why they are every inch as good as anything we will play in the league this term.
They played at a high tempo too when in possession and closed us down when they didnt have the ball and made life difficult.
To Hall Road's credit they dug in though and edged the second half and even at half time, I still fancied them to pull off a narrow win.
The goal has had an element of luck to it, however you make your own luck and in the second half they've deserved it and come closest to scoring before they actually did.
The sending off of both players was unfortunate, due to position I've not seen much of the incident but five minutes into injury time, for both teams to lose a player each for three games, is disappointing, but overall the officials refereed the game very well.

1. Phil Dobson
Made some key saves in the first half which kept Hall Road in the game, the pick however was his save prior to Hall Road scoring, an effort which was destined for the top corner.

2. Danny Norton (captain)
A real threat going forward with his marauding runs down the right flank. Marshalled one of Penistone's main threats, Danny Joynes well throughout.

3. James Whittingham
Back in the side tonight in what I'm sure was a tough choice. Provided excellent defensive cover and worked well with Batty as an attacking force on the left

4. Jake Vernon
A composed display in the middle of the park, covered every blade of grass and has performed well since coming back into the side, last night's display was no different

5. James Piercy
A candidate for man of the match once again in the place of Ash Dexter. Made numerous important blocks and clearances, defended superbly alongside Belcher

6. Sam Belcher
Continues to improve every game, assured in possession and like Piercy was on hand to mop up any potentially dangerous situations. Almost got caught once, when in possession on the edge of his own penalty area, but recovered to win back the ball

7. Tom Bennett
Was sent off deep into added time and will be missed for the three games in which he is suspended, a little quieter tonight as an attacking threat but worked tirelessly in midfield throughout

8. Gareth Owen
After not featuring for Bridlington Town came into the club just earlier in the day, and got into good positions. Looks to be a good acquisition and although maybe not knowing too much about it, bagged himself the all important winning goal.

9. Jamie Reeson
A vital 80 minutes under his belt where he led the line well forced an early save but main threat was in the air and holding the ball up allowing others to get involved

10. Chris Spinks
Was again at the forefront of most the attacking play and his involvement in the goal was vital, maybe just lacked consistent quality from set-pieces.

11. Josh Batty
A non-stop performance from the winger, up and down the left touchline, wasn't peturbed by having to track back and did so admirably, and continued to look a threat going forward.

Substitutes: 12. Nathan Perks ( For Reeson 82 ) - Little time to impact the game but will be looking to force his way into the side in the next few weeks, 14. Dane Mortimer (for Spinks 85) brought on as added defensive cover after the goal, helped keep Penistone out, but like Perks only fleeting appearance, 15. Jack Binns (For Batty 76) was maybe a defensive minded change, but ended up playing his part in keeping a clean sheet after going ahead.