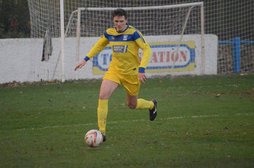 Photo: Sam Belcher in action at the weekend, grabbed the all important winner during last night's 1-0 win over Teversal

With that defeat fresh in the memory, Hall Road boss Dave Ricardo was without Ash Allanson (calf) and Gareth Owen (hamstring) whilst they were also without Dane Mortimer and Jamie Reeson. Tom Bennett featured for the last time before the former Selby midfielder sits out a three match suspension, whilst Brad Ricketts came back into the side. Craig Muirhead returned amongst the substitutes whilst young talent Archie Brown was also named on the bench, alongside Nathan Perks. Teversal to their credit, who had a large majority of their team arrive just 30 minutes before kick off started well and Phil Dobson had to be alert to smartly save low down from an early free kick. With target-man David Cockerill the main outlet for the visitors the bulky striker got into some good positions early on without seriously threatening the Hall Road defence.

They were a few nervy moments defensively for Rangers with keeper Phil Dobson put under pressure from the Teversal attackers from a couple of backpasses, but as a collective unit Hall Road held firm. Danny Norton and Josh Batty were dangerous on either flank and helped provide good service to leading scorer Chris Spinks up front, but the early spoils probably belonged to the visitors, whilst the central midfield trio of James Piercy, Jake Vernon and Tom Bennett worked tirelessly.

The hosts though also looked keen to open the scoring and it was on 24 minutes when defender Sam Belcher showed great desire to rise higher then his opposite number Jason Gregory to head home from close range into the bottom corner. With the goal advantage Hall Road were largely comfortable for the remainder of the evening.

The visitors made a change during the interval, with Gavin Short coming on, and they were forced into a second substitute just three minutes after the break with Daniel Bacon having to be carried off from the field of play and he was replaced by Joshua Radford. The two changes stifled any potential comeback as Hall Road keeper Dobson remained untested, the only nervy moment came when a cross slipped through Dobson's grasp, however James Whittingham cleared any lingering danger. Hall Road also had opportunities of their own to increase their advantage, Craig Muirhead had come on to replace Danny Norton and Nathan Perks replaced leading scorer Chris Spinks, and after a flowing move Rangers best chance came when they brushed the crossbar. A failure to add to their earlier advantage on another night may have proved costly however Hall Road defended well and remained comfortable. With a little over five minutes remaining Teversal were maybe somewhat unlucky to be reduced to ten men when Jason Gregory was given his marching orders and in a bid to see the game out Hall Road made their final change of the evening when Archie Brown replaced Batty in added time.