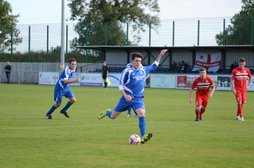 HALL Road Rangers slipped to their third league defeat of the season as defensive errors were ruthlessly punished by Grimsby Borough.
With three Rangers players making their debuts, things got off to the worst possible start when they fell behind after 108 seconds. One of those debutants, goalkeeper Phil Dobson came racing to the edge of his penalty area, and his weak punched clearance from a long punt downfield found its way to Trott who drove the ball into an empty net from outside the area.
After the slow start, Rangers began to settle but found themselves, two goals behind when on 13 minutes Drury lashed past Dobson, after another debutant, Ashley Allanson was robbed 35 yards from his own goal.
This again forced Rangers into a response as five minutes later they were awarded a penalty when Scott Phillips was scythed down in the area by Briggs. Phillips picked himself up to convert his own penalty as he coolly rolled the ball into the left corner, sending the goalkeeper the wrong way in the process.
Rangers believed they had scored an equaliser when on 24 minutes, Josh Batty provided a devilish cross from the left which was converted by the predatory Phillips, only to see his effort ruled out for offside. Hall Road were in the ascendancy at this point and Phillips had an effort superbly saved and skipper Ash Dexter headed over from a corner, however they failed to find an equaliser. The deciding moment came on 58 minutes, when goalkeeper Dobson, believing an offside had been given by the linesman, saw the decision over-ruled by the referee Thomas Cadman, and as play was allowed to continue Bradbury tapped into an empty net from close range to restore the hosts two goal advantage.
With Hall Road pushing men forward in a bid to get back into the game once more, they pushed too far forward and this allowed Drury to latch onto a ball downfield and power home his second of the afternoon five minutes later. Rangers to their credit continued to fight and Chris Spinks reduced the arrears to 4-2 on 68 minutes with a rifled effort, finishing a fine flowing move which earlier involved Bennett and Phillips.
Another defensive error though condemned Rangers to defeat with twelve minutes remaining as Dobson again came racing out of his goal to deal with a ball downfield however his headed clearance from out on the hosts right flank could only find Drury who completed his hat-trick with a deft chip back over the head of Dobson and into an empty net from 35 yards.
After the game Manager David Ricardo was disappointed with the result “It was going to be hard from the off us coming here. Grimsby have run out comfortable winners in terms of the scoreline, but in no means disrespect they played a lot better in midweek when we came to watch them, today we've just given them the game due to us giving away stupid goals.”
“We are suffering as a result because it is undoing all our good work as an attacking threat Tuesday night away at Shirebrook gives us an ideal opportunity to put that right”
Hall Road will be looking for a response, when on Tuesday night they make the long trip to face Shirebrook Town in the NCEL First Division
Share via
FacebookTwitter
https://www.pitchero.com/clubs
Recent news