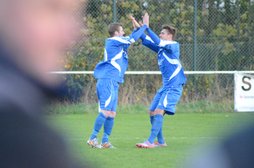 FIVE-STAR RANGERS AS BATTY AND SPINKS LIGHT HALL ROAD'S FIRE
Photo: Chris Spinks was one of many to shine in Hall Road's 5-0 win at Nostell MW

HALL Road Rangers romped to victory at a youthful Nostell MW in a real firecracker display on bonfire night.
Two goals apiece from the impressive and lively pair of Josh Batty and Chris Spinks, were followed by an added time goal by substitute Jamie Reeson who made the ideal impact following his late introduction.
Nostell fielded a youthful looking side as they looked to build on their unlucky narrow defeat last weekend at third placed Hallam.
Rangers welcomed Jacob Vernon back into their midfield as Brad Ricketts remained suspended, whilst skipper Ash Dexter was restored to the centre of defence alongside Sam Belcher, as Dane Mortimer was the unlucky player to be named as substitute.
The biggest surprise to some maybe came with James Piercy having to settle for a place on the bench also as Ash Allanson partnered Vernon in midfield.
The result was never in doubt for Hall Road who looked comfortable all afternoon, but after creating a glut of chances early on in the game, it looked as though their profligacy in front of goal may return to haunt them.
Chris Spinks went close in the opening minute cutting in smartly from his right flank position to force a save low down from Harry Stead.
Tom Bennett an influential creative spark throughout the afternoon was the next to go close as further neat work by Spinks on the right, fed Bennett who struck the keeper.
Nostell looked confident on the break however, and Sam Belcher'a heroic challenge snuffed out a dangerous chance after Jack Binns had been dispossed at left back, taking what appeared to be a knock to his thigh as he slid in.
Spinks on the right, and Batty on the left also caused their fair share of problems on their respective flanks, with Rangers leading scorer Spinks dragging an effort wide of the left post.
After Scott Phillips lofted the ball over the bar from a good position Rangers keeper Phil Dobson had to be alert to save with his legs from the Nostell left.
In a similar pattern to last weekend's 1-1 stalemate with Dronfield, Hall Road were failing to make their chances count but were denied superbly on 23 minutes by Stead.
With the goal at his mercy from a cross on the left, Spinks effort was somehow tipped onto the post, and with attackers pouncing on the rebound, Stead gathered.
Danny Norton was also unlucky not to open the scoring on 35 minutes.
After collecting the ball on the half-way line, Norton danced passed four defenders into the penalty area but his powerful effort was saved by the legs of Stead.
Stead's heroics kept the score down in the first half in all credit to the young keeper, but he couldn't delay the inevitable any further when Rangers took the lead nine minutes before the break
Chris Spinks, in such fine form at the moment made room and opened his body from 12 yards on the left angle to calmy finish off the inside of the far post which capped a fine team move with the ultimate reward.
After Scott Phillips acrobatically volleyed over, Rangers continued to dominate but suffered a blow shortly before the break as Ash Allanson limped off with a groin injury, looking dejected as he came off, Allanson may miss the next month pending on the severity of the injury, which appears to only be a strain, and not a tear.
His replacement Joe Cooper was superb in the second half and may have staked his claim for more regular game-time in Allanson's absence.
Hall Road doubled their lead on the brink of half time though as Spinks pin-point angled free kick from the right saw Batty nip ahead of his marker and glance the ball into the bottom left corner after a superbly timed darting diagonal run.

The second period followed the same pattern as most of the first as Rangers switched through the gears to finish off their opponents.
A sweeping move from left to right, five minutes into the start of the second half resulted in Spinks again cutting inside to see his effort palmed away by Stead.
Nostell almost found a way back into the game though as Connor Presley tricked his way inside from the left and unleashed an effort from 20 yards which had Dobson beat, but unluckily rattled the far post, rebounding to safety on 52 minutes
Scott Phillips missed a glorious chance after excellent link up play between Joe Cooper and Norton on the right.
Norton fed Cooper who got to the by-line inside the area on the right, his pull-back found Phillips who's unfortunate luck in front of goal continued, as he failed to connect at the far post from close range.
Phillips was soon brought off and replaced by Mortimer as Rangers supremo Dave Ricardo opted to pull off the eleven goal striker with a view to the busy month ahead.
Any doubt as to the destination of the three points was vanquished on 65 minutes though as Stead was left exposed by his defence.
Josh Batty scored his second and Rangers third.
A neat backheel by Spinks completed the perfect one-two on the edge of the penalty area as Batty latched onto Spinks excellent improvisation to cooly slide home past Stead when through on goal, his fifth goal since joining from Winterton Rangers last month.
Hall Road were flying and with Nostell appearing to grow ever more frustrated with each other, they continued to wilt in the final quarter, as two minutes later Spinks latched onto Tom Bennett's slide rule pass to expertly round the keeper and tap into the empty net with 23 minutes still remaining, Spinks 15th goal of the season so far.
After Phil Dobson watched a deflected effort sail wide of his goal Rangers continued on the front foot as Chris Spinks when through on goal, attempted a cheeky chip but his clever effort rebounded off the crossbar.
Rangers keeper Dobson was largely a spectator throughout but showed great concentration to tip round the post and keep hopes alive of just a third clean sheet for Hall Road this season.
With 15 minutes to go Ricardo brought off man-of the match Spinks to allow Jamie Reeson the opportunity to gain some much needed match sharpness as he continued his return from injury.
The stellar team performance was given the perfect finish in added time at the end of the game when Cooper's free kick was only palmed into the path of substitute Reeson who accepted the present handed to him and he made no mistake in clipping the ball over Stead and into the net for Rangers fifth to ensure November started with the seasonal bonfire night bang.

FROM THE PRESS-BOX – By Dave Ricardo
“It's been coming, and in terms of results we've played about 20 games now and only lost four.
If we can go on a run like that, as we are doing better at this stage of the season then we have done in recent years it is pleasing to be winning the vast majority.
It's important we just keep it going and if we do the club will be buzzing.
Its such high standards we all set at the club, from us as a management team, through to each of the players.
It's about keeping them levels and hitting them consistently.”

STAR-LARKER – Chris Spinks
A difficult one to call on a day where every player in the blue and white had an excellent game.
Joe Cooper was superb after coming off the bench and helped carve Nostell open on more then one occasion, whilst Danny Norton gave Nostell full-back Dillon Connolly a torrid time in the second half especially.
The defence stood tall to anything that was thrown at them with Sam Belcher impressing early on with a number of important clearances and blocks. Phil Dobson was largely a spectator but pulled off a fine save with ten minutes to go to give Rangers just their third clean sheet of the season
Josh Batty was also lively throughout and alongside Spinks the pair were simply unplayable, not just for Nostell but would have been for any side in NCEL Division One

FROM THE PRESS-BOX – By Neil Winsor
A comfortable win where everybody performed well, they were professional, and even with the game seemingly won showed great ruthlessness to keep going and help Rangers goal difference.
It's always nice to keep a clean sheet too and this was also well earned as Nostell were largely restricted to long range efforts.
Yesterday also showed Rangers have players who can come off the bench and influence games positively.
Joe Cooper was superb whilst Jamie Reeson put himself about and bagged himself a goal too.