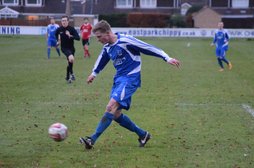 Hall Road Rangers had to come from two goals down on Saturday Afternoon to win their home game against Knaresborough Town at Haworth Park. Two quick fire goals from Colin Heath put the visitors two goals to the good as Rangers started slowly conceding both goals inside the first eight minutes.
No to be deterred thought and spurred on by encouragement from their management team Rangers dug deep and turned on the quality. New Signing Louis Kirk started the come back on 9 minutes as le last home from close range. Danny Norton pulled the home side level on 20 and eventually put them in the lead on 41.
With the route complete and with the second half under way the icing on the cake came from Chris Spinks who lashed home a free kick just before the hour mark to make it 4-2 to the home side.
Harry Brown gave the away side faint home of a comeback on 81 minutes and after weathering the storm and running down the clock Rangers secured the three points.
After the game Manager Dave Ricardo was delighted with his sides performance and will now and a quick turnaround for the visit of Rossington Main on Tuesday night. Rangers currently sit in 4th spot with two games in hand over league leaders AFC Emley and only six points behind them. Visitors Rossington languish in 20th spot in the NCEL and with no wins in their last 12 outings it will be hard going for the visitors. Kick off will be 7:45 at Haworth Park.
Share via
FacebookTwitter
https://www.pitchero.com/clubs