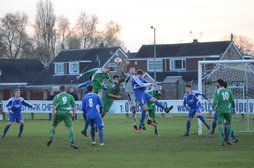 Shirebrook refuse to take to the pitch

THERE was a distinct lack of Christmas spirit as Hall Road Rangers were left frustrated as their game with Shirebrook Town was abandoned at half time whilst leading 3-0. James Piercy, Chris Spinks and Sam Belcher had helped see Hall Road race into a strong half-time position at Haworth Park in their NCEL First Division fixture.
Shirebrook however, after spending the first half under the cosh and following the sending off of visiting striker Bruno Holden refused to take the field for the re-start of the second half leaving referee Mehdi Najefi no choice but to abandon the match.
Hall Road were well worth their half-time lead. Headers from Ash Dexter and James Piercy narrowly missed the target whilst Chris Spinks dragged an effort just wide of the far post and saw a free kick well saved in the opening quarter. Rangers threatened further and after a free-flowing counter attack down the left flank Spinks was threaded through on goal but dragged his effort wide. Another fine move by fourth placed Hall Road saw Spinks denied when his chipped effort was turned round the post after smart work by Jake Vernon.
It was from the resulting corner that the hosts opened the scoring on 14 minutes. Spinks provided the pin-point cross from a corner and Piercy rose to nod home off the post from eight yards. Rangers talisman Spinks turned to goalscorer after providing his team's opener just ten minutes later. Vernon played in Danny Norton on the right and his driven cross evaded everybody aside from Spinks who headed into an empty net from close range, in what would have been his 21st goal of the season.
With the visitors growing frustrated at been unable to get a foothold in the game, their skipper Anton Foster was booked for an off the ball incident involving Norton. They were then duly reduced to ten men when Holden was dismissed for threatening and violent conduct towards Hall Road midfielder Conner Harman and the referee.
In an ugly scene Holden refused to leave the pitch as he angrily remonstrated with the officials and spectators for a number of minutes and when he was finally removed, Rangers notched their third goal through defender Sam Belcher who poked home from a cross, a minute before the break.
With the hosts in a strong position the two teams came together again on their way to the dressing room with Shirebrook keeper Liam Osbourne continuing to threaten a number of Hall Road players and manager Dave Ricardo. Then bizarrely, as Hall Road emerged for the second half, the visitors refused to do so and before the second half could get underway the game was forced to be abandoned. Rangers must now await the decision of the NCEL committee who will discuss the best course of action to take at their next meeting.
Until then, Hall Road have a Boxing Day fixture to look forward to next as Dave Ricardo and assistant Bill Gill travel to face their old club Selby Town for a 3pm kick off.
Share via
FacebookTwitter
https://www.pitchero.com/clubs
Recent news