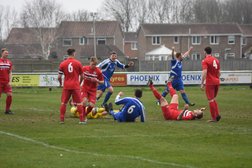 Piercy headers edges nervy Humber derby for Hall Road
James Piercy’s first have header was enough to earn Hall Road Rangers their 11th consecutive home win, over local rivals and fellow promotion chasers Grimsby Borough.
In was a nervy encounter in which both sides had several fine opportunities on goal, but Dave Ricardo’s side held their nerve in the second-half to claim another huge 3 points at the top of the NCEL Division One.
With the news in the week that the club will received the points from the abandoned Shirebrook game back in December, the Rangers now technically sit in 2nd place; 1 point ahead of AFC Emley, and 3 behind Pontefrect Collieries- next week’s opponents in a huge promotion clash. (The points will officially be added on March 23rd)
The Rangers started the better side and the best opportunity of the opening exchanges came to Danny Norton, whose powerful effort from the corner of the box was tipped onto the bar by Grimsby keeper Scott Drury.
But just moments later Hall Road would take the lead; from the resulting corner, James Piercy climbed high above the Borough defence and headed home a powerful effort.
The goal only enthused Rangers to put even more pressure on the Grimsby goal; another sublime save by Drury prevented Joe Cooper’s header from doubling the lead.
The best chance of the half for the visitors came just before half-time, with Grimsby captain Darren Hanslip heading just wide of Phil Dobson’s goal from a delightful cross.
A deserved lead at the break for the Rangers, who looked very dangerous on the counter attack at times. Grimsby had been sloppy in attack, failing to find that crucial final ball.
Shortly after the restart, it was Hall Road’s captain this time who had the chance to score; Ash Dexter’s header from a corner sailed over the bar. Likewise, moments later, goal-scorer Piercy blasted a volley from the corner way wide.
The visitors however began to turn the screw on the hour mark but Phil Dobson remained unbeaten between the sticks, again with Grimsby being unable to get a real threatening shot away on the Rangers goal.
The best chance for them came in the 89’s minute, when Phil Dobson’s fingertip save pushed a Grimsby shot wide of the post.
As tensions mounted, Josh Batty was sent off in added time for an altercation on the touchline. But it wouldn’t affect the final result with Rangers hanging on for a crucial victory, leaving them 10 games unbeaten in the league, and 11 in all competitions.

Next Up: Pontefract Collieries (A) (Saturday 18th March, 3pm K.O)