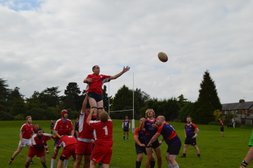 League opener goes the way of the men in black.

After last weeks excellent win over a team a league above them, hopes were high for the Templars going into their first league game of the new season. With several players injured or unavailable Templars line up was much changed from the previous week. Full debuts were handed to second row Seb Wehmeyer and flanker Anthony Lucy. Aeron Stubbs started his first game of the season at scrum half and last weeks number 10, Ed Merry was moved to centre.

With Thurston only having 14 players at the start of the game the coaches were hoping that the Templars back line would exploit the advantage of having an extra man. This didn't prove to be the case in a poor first half and as it was, it was Thurston who looked the better of the two sides with their influential scrum half running the game behind his powerful pack and feeding his two centres who were making in roads in the Templars defence with their strong running.

And it was Thurston who took the lead from a line-out five metres from the Templars line. From the line-out, Thurston drove over to take the five points and duly added the conversion to make it seven points to nil.

After the try the game drifted into a scrappy affair with poor rugby from both sides and Thurston giving numerous penalties for repeat offences at the breakdown and several high tackles from their outside centre who was lucky not to receive a card from the referee who was lenient to say the least.

Thurston added to their tally with a penalty against the Templars for coming in from the side, to increase their lead to ten points. It wasn't long before Thurston further extended their lead with a scrum five metres out and the Thurston pack powered their way over the line to lead by fifteen points at the break.

It didn't look like it was going to be Templars day at the turnaround as props Roger Wills and Jordan Samuels had to drop out of the front row due to injuries. This meant Adrian Illingworth and Craig Trevain moving into the front line for the second half. This seemed to galvanize the Templars pack though and the eight started pushing back the Thurston pack at the scrum.

As the second half began the Thurston team were still trying to power their way through the Templars defence but the Templars held firm with winger Tom Partridge, playing with a suspected fracture to his wrist, and his fellow winger Ashley Mead and fullback Nik Mckean stopping certain tries with fantastic last ditch tackles.

The pattern of the match then started to change with Templars finding a foothold in the game with Ed Merry moving to ten and becoming a huge influence in the Templars back line. With a penalty coming Templars way courtesy of another breakdown infringement Merry converted to get Templars on the board.

The Templars were now starting to look to add to that score and from a penalty in their own half, Josh Donaldson lined up to kick to touch but instead kicked long into the empty space left by the short-handed Thurston back line. Merry was the quickest of the chasing Templars and a kind bounce saw him gather the ball and finish under the posts, converting his own try to bring the Templars within five.

From the restart Merry went the length of the pitch and chipped over the covering full-back to touch down for his second, only to see the referee awarding a scrum to Thurston for a knock on that only he had seen. Good work by the Templars pack saw the ball turned over and quick thinking from Wills to kick the ball wide allowing winger Ashley Mead to get his first try for the club as he picked up and ran in to the corner much to the delight of his teammates.

Templars were now in the ascendancy and taking control of the game but Thurston still looked dangerous on the break but excellent defence from the Templars and discipline at the breakdown kept Thurston at bay. Thurston were now starting to lose their pattern and were infringing constantly which led to a sin binning for their second row after the referee finally lost his patience.

Merry was know controlling the game from his new role at ten and took Templars into the lead after a mazy run through the Thurston team to add another converted try to give Templars the lead. The game ebbed and flowed from this point on but Templars held on for a remarkable comeback win.

Coach Poulter praised his side after such a poor start to the game and to come back and win shows real character in a side. The team dug in when it was needed and ground out a win and showed some exceptional mental strength when injuries hit and stuck to the task in hand.