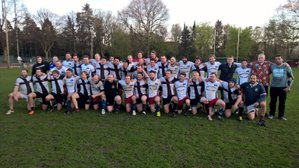 Not so many, to lots

HSV invited the Exiles for a training match, which both sides used to blood new players, wake up some older legs and have a look at players in alternative positions.
In the opening exchanges HSV looked very confident and pushed the exiles into their own half, eventually settling for the first points of the game from a penalty kick. After this the Exiles began to find their rhythm, getting the ball through the hands and finding space out wide. These spaces were well used by Matt, Phillip, Olivier, Gus, James and Ben as they ran in tries. The exception was Danny who decided to make space for himself by bashing four HSV players away prior to crushing one as he dived to the line for a try.
Phillip was on kicking duty for the Exiles, getting a great kick from the corner prior to changing to drop kicks to speed up the play. Towards the end of the game HSV managed to get the Exiles under some pressure again, pinning them back in their ’22. This pressure led to an interception try for HSV. The game on the pitch finished with the dying light and the Exiles ran out winners with lots to HSV’s not so many. It was at this point that the third half started with about 40 lads and lasses heading to the Gröninger brewery to share several well deserved kegs of beer.
The most important moment of the entire day then came, the boat race, with the Exiles controversially selecting some French backs into their line-up. This, however, turned out to be a masterstroke with the agile chappies managing to deepthroat their beers double quick securing another victory for the Exiles. All in all, a great day, with special thanks to the HSV guys and Matt for stepping up and organising the game. Everyone involved seems to be looking forward to a re-match.
Share via
FacebookTwitter
https://www.pitchero.com/clubs
Recent news