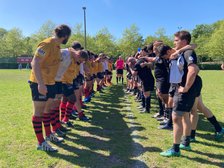 Victory over HRC II/I in the second Hamburg Derby!

What a rugby day it was! Hot and sunny in our beautiful city, for this second derby of the season between the Hamburg Exiles RFC and the Hamburger Rugby Club II/I team(s).

The pace was given early in the game: it will be physical. After a difficult first ten minutes, punctuated by several handling mistakes by the Exiles, our scrum-half Nick, exploiting a weakness in the HRC defensive line after a contact situation, opened the score. Unfortunately not converted, bringing the Exiles ahead of their opponents in the score. 5-0.

Reaction from the red-and-yellow has not been long to wait for. Under heavy pressure, the Exiles conceded a penalty, allowing HRC to come reduce the points difference by three points. The game went forward. Physical and controlled from both sides, until our brilliant center Lenny, managed to pass through both HRC’s defensive line and their try line, and scored the second try of the match. Inspired by this action, Third-row Tony bullied the visitors defense and scored a third try for the men in black, just before the half time. 15-3.

Despite the good effort put onto it, the second half started badly with the injury of our flanker Carel, hit at the knee and a yellow card for our centre Rob, due to a dangerous tackle. As bad news usually come in bunches, HRC’s fly-half scored two tries, after having literally danced with the Exiles defensive line. Both converted. Clinical and pragmatic, HRC secured the lead 15-17.

Shaken but not defeated, the Exiles boys re-organised quickly. Tony led the mutiny, with a fantastic run out a scrum at half-pitch and, after a penalty against HRC, brought another try. This time converted by our veteran and full-back player Olivier. To celebrate his first cap, Enno gave all his forces into the battle and carried the ball for over 30 meters.. with three Hamburgers trying to put him down! Unfortunately, due to a “guillotine” tackle a few minutes later, he would also get his first red card, bringing the Exiles to 14 for the rest of the game.

Exhaustion started to kick in for the hosting team, but HRC first players, although fitter, did not manage to change the game. Capitalising on a final penalty and a wide space in the HRC defense, Tony scored his third try and secured not only the win but also being awarded as man of the match. Converted by Olivier. 29-17.

After a final HRC try, the whole Exiles players and supporters took a collective deep breath, as the red 10 again ridiculously passed over 5 black defenders before passing the ball to one of his mate, five meters away from the Exiles try line… fortunately awarded dick of the day for not catching the ball, making a knock-on and giving the ball back to the Exiles. After another 10 minutes of physical and intensive fight, the ref finally blew the end of the game: A win 29-22 for the Exiles, despite some lacks of discipline especially in the line-outs, but secured by a collective control of the game and some good South-African flair among the team, rewarding the hard work of these last weeks.