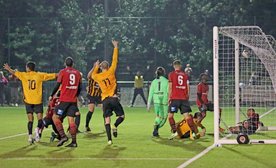 Ambers edged out of FA Vase

The Ambers were beaten by Golcar United as Friday night football arrived at Olivers Mount ....

Another day, another FA competition and another opponent from a different league, in this case first time opposition Golcar United from the North West Counties League in the FA Vase 1st Qualifying Round at Olivers Mount on a rainy Friday night.
With one eye possibly on next Saturday’s FA Cup trip to Halesowen Town, Manager Russ Eagle made no less than eight changes to the side that progressed past Coventry United last weekend, with just Tom Roebuck, Ben Teasdale and Kane Reece retaining their shirts. Amongst the replacements were two debutants, 18 year old keeper Joe Bacon and experienced midfielder Cecil Nyoni, most recently of Belper Town.
For their part, the visitors featured a few familiar names including a smattering of former Yorkshire Amateur stars, although NCEL legend Ash Flynn had to be content with a place on the bench.
The Ambers started the game positively, Sam Smith having a first minute header on target but comfortably held by McLachlan before a penalty appeal for a possible handball against a United defender as he dealt with a cross from Reece, was turned down.
Golcar began to grow into the game with left back Henry playing a prominent role, but it was his opposite number Alfie Eagle who was on hand to head clear under pressure when Burnett sent over a deep cross to the far post. Burnett then raced away onto a flick from Cox and shot across goal, but Bacon manged to get a touch on it and divert it away for a corner.
United started to turn the screw and Hallam and Naidole both had efforts that just missed the target before Rikki Paylor threw himself in front of a Skarz shot to block its progress, but as The Ambers struggled to clear their lines, a cross back into the box found Burnett in acres of space and he planted his header past Bacon to break the deadlock after 27 minutes.
The goal spurred on the visitors and The Ambers were indebted to Bacon who saved from Naidole before standing up tall to deny Cox, the ball rebounding onto the striker and then onto the post as Handsworth rode their luck.
Against the run of play, Handsworth suddenly found themselves back on level terms as Eagle’s free kick into a crowded penalty area eventually found its way to Smith who blasted it home to open his account for the season. Almost immediately, as The Ambers went hunting for a second goal, the visitors survived another penalty appeal which looked clearer than the first, but once again Mr Parker waved it away.
On the stroke of half time, Golcar were so close to re-gaining the lead but were again denied by Bacon who was having a superb debut, as the keeper made a fantastic double save to keep the hosts in the tie.
Jack Harrison replaced Nyoni at half time as The Ambers looked to wrestle back control of the midfield, but it was the visitors who went closest early on, Naidole failing to hit the target from inside the box.
The nearest The Ambers came to breaching the United defence was a back post Roebuck header from a Harrison corner which was blocked on the line, and as the visitors broke quickly from the resultant corner kick, Liam Bell earned himself a yellow card for a cynical foul near the halfway line as the counter attack was swiftly halted. Unfortunately, The Ambers failed to clear their lines from the ensuing free kick and the ball was eventually played to Burnett who burst into the area and fired in past Bacon.
The Ambers suffered another blow minutes later when Paylor was injured as he tried to head a cross clear and after some lengthy treatment, the skipper had to leave the action with Nana Nyarko replacing him, Bell shuffling across into the middle. A swift break upfield saw Howarth nip in behind a napping defender and from his pass, Teasdale got a shot away but McLachlan was on hand to smother the strike.
The visitors picked up a couple of yellow cards in quick succession as they tried to ensure The Ambers could not get a head of steam up in the closing stages, and with all three substitutes used, Handsworth had to play the last five minutes a man short as Nyarko appeared to pull a hamstring and had to be helped off the pitch. The numerical disadvantage and the fact that they were chasing an equaliser almost cost The Ambers more dearly as they left spaces behind, but Bacon cemented his Man of the Match award with two more excellent saves right at the death to keep the scoreline respectable.
So, the FA Vase will have to wait another year as all eyes now turn to next Saturday’s FA Cup adventure at Halesowen.
Share via
FacebookTwitter
https://www.pitchero.com/clubs
Recent news