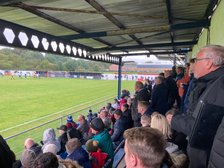 The Ambers suffered a 6-0 defeat at the hands of Pontrefract Collieries to end their great run in this season's FA Cup ....

As the old saying goes, all good things must come to an end, and so it was at Pontefract on Saturday when The Ambers’ record equalling run to the 3rd Qualifying Round of the Emirates FA Cup was brutally ended by the higher ranked home side who, in fairness, looked a class apart as they dismantled The Ambers 6-0.
Whilst the ineptitude of the referee was evident for all present in the bumper crowd of 455 to see, that should not take away from the quality of the opposition who had the game won by half time, thanks to a high tempo game which pushed The Ambers back from the first whistle.
The first clear chance on goal saw Tom Roebuck have to make an effective block to deny Smith after old adversary Hey had raced away down the left to create the opportunity. A handball on the edge of the Pontefract area saw Richard Tootle fire a free kick just wide of the far post in the first Ambers foray of note, whilst Billy Mole raced onto a Sam Smith flick but his effort was blocked.
After 17 minutes, referee Mr Ross decided to take centre stage for the first time as he adjudged nothing more than a coming together between Rikki Paylor and Hey to be a foul and awarded a penalty to the home side, but Ben Townsend came to the Ambers’ rescue as he superbly pushed Redford’s spot kick round the post.
From the resultant corner, the official inadvertently levelled things up when he failed to see a clear handball on the goal line that denied Colls an opening goal and to add insult to injury, yellow carded a Pontefract player for questioning his bizarre decision.
Townsend then tipped a Redford effort over the bar after a good run by the striker, but from the corner, the hosts took the lead when the ball was bundled home after a goal line scramble, with the keeper adamant that he was impeded as he jumped to grab the ball, earning himself a yellow card from the fussy official.
The Ambers rallied well with Smith and Kane Reece both seeing goalward headers fail to trouble home keeper Musselwhite before Ponte broke down the left and Redford finished well from Gordon’s cross to double their lead.
Ponte now had their tails up and should have increased their lead when Hey picked up a wayward Ambers pass but missed the target with the open goal gaping, and Townsend then tipped a Rothery effort round the post at full stretch.
Mr Ross then decided that as no one had been paying attention to him for ten whole minutes, it was time for him to hog the limelight again and he managed to bamboozle everyone in the ground when he awarded another penalty against Paylor, this time for clearing his lines when one of the Pontefract players stooped low to try and get his head to the ball.
This time, Redford made no mistake as he blasted the ball past Townsend to make it 3-0 and effectively seal the game, and the referee waved the yellow card at Tootle for expressing his opinion on the latest bizarre episode, quickly following it up with a yellow card for Smith for questioning another decision that the man in black got wrong.
As half time approached, The Ambers finally drew a save from Musselwhite when Mitch Dunne got on the end of a Smith flick on but the keeper was equal to the effort, and any thoughts that Handsworth may have had of making a glorious second half comeback were cruelly ended two minutes after the break when Clarke thumped home a header from a right wing corner.
Jordan Lonchar made his comeback after injury when he replaced Mole early in the half and he immediately made an impact by putting The Ambers on the front foot and after a penalty appeal for handball by Greenhough was turned down, Tootle fired an effort just wide.
Pontefract then turned up the heat, with Rothery and Smith both hitting efforts wide before Smith then rattled the cross bar, whilst at the other end Sam Smith fired over after Lonchar had created the chance.
Nana Nyarko replaced Jones at right back but it was Tootle who again went close when he blasted over from a Dunne cross, whilst Townsend was called upon to punch a Hey effort away for a corner, from which Redford flicked the ball on allowing Hey to bundle the ball home for Ponte’s fifth goal.
Almost immediately, up stepped our friend in black to astonishingly issue a red card to Nyarko for a foul in front of the dug out that was in truth worth nothing more than a yellow but the reaction of the home bench and players no doubt swayed the official’s decision.
Redford should have claimed a hat trick when he waltzed round Townsend for an open goal but Tootle somehow got back to clear the ball off the line, then Hey blasted over when it seemed easier to score after rounding Townsend, but Ponte weren’t to be denied a sixth and that came when Smith was first to react when Townsend was unable to keep hold of a long range shot.
And so, after four great performances in the previous Rounds, The Ambers exited the competition in disappointing fashion and can have no qualms as the best team clearly won the game and deserved to progress for the first time in their history. That should take nothing away from the achievements of the players and management in equalling the Club's best ever performance in the competition.
Share via
FacebookTwitter
https://www.pitchero.com/clubs
Recent news