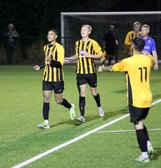 Howarth double as Ambers get back to winning ways

The Ambers beat Penistone Church 3-2 to progress in the S&H Senior Cup ....

The Ambers put their recent poor league form to the back of their minds as they welcomed Penistone Church in the 1st Round of the S&H Senior Cup, with a trip to Sheffield FC awaiting the victor.
The visitors had the better of the early exchanges with Ben Townsend being forced into saving efforts from Kemp and Ryan, before Jordan Lonchar made room for himself on the edge of the Penistone box but shot over.
As the game opened up, Townsend saved again from Newsome before Lonchar and Leon Howarth both drew saves from Church keeper Rhodes, and Tom Roebuck headed over from a corner as The Ambers began to take control of the game.
The breakthrough came after 35 minutes when Howarth linked up with Sam Smith to set up Mitch Dunne. The striker moved the ball out from under his feet and struck the ball home from just outside the area to claim his 8th goal of the season.
Handsworth came close to doubling their lead when a great move on the right involving Howarth and Kane Reece released overlapping full back Sam Fewkes but his well driven cross flew across the six yard box and did not get the required touch from an Ambers player, and they nearly paid the ultimate price when Penistone broke quickly on the right leaving High in on goal and favourite to score but Townsend saved at point blank range to ensure The Ambers went in ahead at the break.
The second half started with a bang as Howarth, who had grown into the game as the first half developed, scored a stunning goal from 25 yards out, his shot rocketing into the top corner past a startled Rhodes.
The visitors almost reduced the arrears immediately when a fine ball from Ellis released High but Townsend was quickly off his line to deflect the ball wide and Lovell just missed the target from the corner that followed. It wasn’t long though before Church did get their goal, a long free kick into the box eventually falling to Ryan who headed home from five yards out after The Ambers failed to clear their lines.
There was a long awaited return to action from the bench for Ant Mackie after missing eight games through injury and his pace on the right flank was a welcome addition. Within a few minutes, The Ambers stretched their lead and it was that man Howarth again who raced onto a Reece lay off to virtually repeat his earlier strike, but once again, The Ambers made it hard for themselves when they soon conceded another sloppy goal. The ball was given away in the middle of the park and a quick Penistone break down the middle allowed recently introduced substitute Keightley to race through unchallenged and fire past Townsend.
The visitors sensed that they were still in with a chance and started to dominate possession, and The Ambers task was made harder when they lost Roebuck who limped off with 15 minutes left. Andy Gascoigne came on in centre midfield, allowing Fewkes to drop in at centre half, his third position of the evening.
Church sub Hughes then tried to beat Townsend at his near post but was denied as was Newsome who made space for himself on the edge of the area and got a decent strike away, but it was the hosts who nearly grabbed a fourth goal when Howarth’s crossfield pass picked out Dunne on the left, the striker eventually unleashing a shot which could only find the side netting.
The Ambers then managed to shut up shop and saw out the remainder of the game without too many threats. Church return to Olivers Mount next Wednesday for Part 2 which will hopefully be as entertaining as this game was.
Share via
FacebookTwitter
https://www.pitchero.com/clubs
Recent news