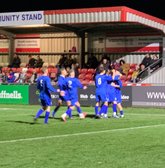 10 man Ambers defy the odds to progress in Cup

The Ambers beat Sheffield FC 3-2 in the 2nd Round of the S&H Senior Cup at The Home of Football ....

It was another great night for the Handsworth faithful as, against all the odds, The Ambers turned in a super performance to beat NPL opponents Sheffield FC on their own patch to progress into the Quarter Finals of the S&H Senior Cup.
Already shorn of the likes of Fewkes, Howarth and Roebuck, The Ambers suffered another blow when Jed Phillips pulled up during the pre-match warm up, meaning that it was a strange looking side that lined up for kick off, with Jack Harrison filling in at centre half and two teenagers Sam Essien and Jake Baldwin anchoring the midfield.
The Ambers started the game positively with Mitch Dunne drawing two comfortable saves from ex Amber Hedge in the Sheffield goal, and the home side responded with a Reaney effort flying wide and an early corner rebuffed by Ben Townsend.
What could have been the defining moment of the game then happened in just the 9th minute when a misplaced pass caused Rikki Paylor to over commit to the challenge on his opponent, and as he was the last man, the referee deemed the challenge worthy of a straight red card, sadly bringing a premature end to the skipper’s 50th Ambers appearance.
From the free kick, The Ambers were almost punished further when Reaney’s effort crashed against the woodwork and this unsurprisingly led to a period of pressure from the hosts, albeit not many chances were created against an Ambers back line that now comprised of Essien, Ant Mackie, Harrison and Billy Mole.
Some good link up play between James Oliver and Jordan Lonchar set up Dunne but his fierce shot missed the target, whilst a far post header from Sheffield captain Newsham also went wide. Then, out of the blue, The Ambers sprung forward and Lonchar's perfectly weighted pass found Oliver racing clear of the Sheffield defence. As Hedge charged out of his area to close him down, the youngster rounded him and rolled the ball into the empty goal to silence the home crowd.
As half time approached, Robinson fired a long range effort wide and Townsend was quickly down to smother an attempt by O’Connor after he latched onto a poor back header. The second half began with Sheffield on the front foot against the ten men. Newsham missed with a header from Turner’s cross before the dangerous Hall got in at the back post but his effort rolled agonisingly across the six yard box.
The Ambers were soaking up the pressure well and always looked capable of springing forward at pace, but it was from a set piece that they doubled their lead just after the hour. A free kick from just inside their opponent’s half was only cleared out as far as Kane Reece who slammed the ball past Hedge to make it 2-0.
The tireless Reece then just failed to pick out Dunne when he crossed into the box, and at the other end, Reaney shot wide before Hall’s effort was tipped around the post by Townsend, but from the corner, a deftly placed header from Newsham halved the arrears and gave the hosts some hope.
Another teenager, Noah Flint made his Ambers debut from the bench, replacing Lonchar who had once again put in an excellent shift, and within a couple of minutes, The Ambers extended their lead again when Reece flicked the ball on for Dunne who slotted the ball home past Hedge to continue his rich vein of scoring form, making it 8 goals in his last 7 outings.
Yet another teenager Liam Kamsika was introduced for just his second appearance, closely followed by Richard Tootle and as the game moved into the last ten minutes, the home side started to really build the pressure. The Ambers defence was eventually breached again when Tootle brought down Hall in the area and Newsham slotted home the penalty, albeit The Ambers were aghast that an earlier foul on Reece immediately before the penalty incident, was completely missed by the officials.
With an added six minutes at the end, it was heart in the mouth time for the watching Ambers but the additional time passed without too many issues, and as the final whistle was blown, the heroic ten men were almost out on their feet after a terrific performance. The term ‘hard earned victory’ has seldom sounded more apt on another night to remember, to add to an ever increasing list this season.
Share via
FacebookTwitter
https://www.pitchero.com/clubs
Recent news