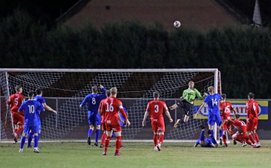 The Ambers were beaten 1-0 at AFC Mansfield in a below par performance ....

If there was ever a prime example of “after the Lord Mayors Show”, Tuesday night’s game at AFC Mansfield was it. Just days after the euphoria of the weekend’s FA Cup victory at Halesowen Town, The Ambers came crashing back to earth with a bump as they suffered a disappointing 1-0 defeat on a night when they never really got going against one of the division’s tightest defences.
In their defence, the pitch did not suit our preferred style of play, but there will be worse surfaces between now and the end of the season, so we need to find a way to win when the odds are stacked against us.
One bright spot was a solid debut from right back Brad Jones, drafted in from Staveley on the day of the game, who slotted seamlessly into the back four, but it was his opposite number, the ex-Ambers youngster Tom Cropper who scored the only goal of the game when he poked the ball home after a scramble eight minutes from time.
To their credit, The Ambers gave their all and did everything but score, but some below par finishing combined with an excellent display from home keeper Hough gave the impression that we could have played all night and not scored. The young keeper appeared from nowhere to tip efforts from Richard Tootle, Sam Fewkes and Jack Harrison over his bar in the second half as the travelling fans were just about to celebrate, and deservedly took home the Man of the Match award.
Just one of those nights I’m afraid. Roll on the weekend and the chance to put it right.
Share via
FacebookTwitter
https://www.pitchero.com/clubs
Recent news