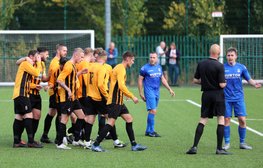 Ambers fans were hoping that the hangover from last weekend’s FA Cup exertions that was evident at Mansfield on Tuesday, was well and truly banished as the division’s current bottom placed team Hemsworth Miners Welfare were the latest visitors to the Express Worktops Stadium.
With Ben Townsend unavailable, there was a league debut for Joseph Bacon in goal, and unfortunately, his first involvement was to see an unchallenged second minute header from Wells centre back Cadzow fly past him to give the visitors a shock lead, despite the valiant efforts of Richard Tootle to hack the ball off the line.
Despite the early setback, The Ambers soon settled and were on the front foot immediately with James Oliver leading the charge on the left, his early effort just off target, before Mitch Dunne, regularly dropping deep to pick up the ball, took centre stage and had three early attempts that brought away keeper Morton into the game.
In a rare Hemsworth breakaway, The Ambers looked doomed as Swaine raced clear but Bacon was quickly off his line to win the one on one duel with the striker, before the action quickly switched to the other end, Sam Smith heading just wide from a Tootle cross.
In what was proving to be a see-saw tussle, the quick breaking Wells should have doubled their lead as they sprang forward after defending a Handsworth corner. A deep cross from the right found Wilson arriving at the back post but he was unable to apply the finishing touch and he headed over with the goal at his mercy.
There was then a big blow for The Ambers as Oliver was fouled on the touchline by Swinburn, the challenge earning the offender a yellow card, and that was the last action of the day for the winger who was unable to continue, leading to a long awaited Ambers debut for Summer signing Billy Mole who took up a position on the left.
After surviving a penalty appeal for a potential handball, The Ambers suddenly found themselves 2-0 down when a loose ball in midfield was seized upon, and former Amber Connor Brunt was played into space on the right, from where he fired a powerful shot across Bacon and into the far corner of the net.
Once again, The Ambers started to apply more pressure and Mole managed to get his head onto a Dunne cross but Morton was on hand to collect, and the keeper was then well placed to hold onto a strong header from Tovm Roebuck as he got on the end of a Tootle delivery.
The Ambers breakthrough finally came just before half time and it was the result of some good interplay on the right that enabled Jack Harrison to break into the box. Morton came out to meet him and the ball deflected straight to Smith who rammed home his 4th goal of the season.
The goal gave Handsworth the impetus they needed and there was a general feeling that the game was far from over as the second half kicked off. A good move almost saw the home side draw level but Harrison skewed his effort wide after Dunne had set him up nicely, but it mattered little as Roebuck stooped to head home from a Tootle corner, minutes later.
The Ambers were on the charge now and Smith twice went close to getting on the end of good crosses, before the visitors suddenly stunned the home crowd when they regained the lead. Swinburn picked the ball up in midfield and fed Swaine on the right, and he blasted the ball past the exposed Bacon at his near post.
The latest setback seemed to upset the rhythm of The Ambers and Swinburn fired over before Swaine forced Bacon into a diving save as The Wells sensed there was definitely something in the game for them.
It was real end to end stuff now as The Ambers started to build up a head of steam again whilst Hemsworth looked very dangerous on the break, but it was The Ambers who made the pressure count. A great bit of football involving Roebuck, Mole and Dunne released Kane Reece on the edge of the box and his pass to Harrison was inch perfect, allowing the midfielder to run onto it and slam the ball home to restore parity.
Two minutes later, the turn around was complete when Tootle’s cross was met by Smith but his goal bound effort was saved, and in the scramble that followed, Roebuck was on hand to poke in his second of the game to put Handsworth in front for the first time.
The centre back then rescued The Ambers when Hebda suddenly popped up in a dangerous position in the area, and from the resultant corner, Cadzow’s diving header flashed just over the bar. It was all about game management now for The Ambers as the referee added on a further five minutes, but the icing on the cake was delivered when Tootle blasted a free kick from just outside the box straight into the bottom corner of Morton’s net to open his account for the season and secure the hard earned victory.
Share via
FacebookTwitter
https://www.pitchero.com/clubs
Recent news