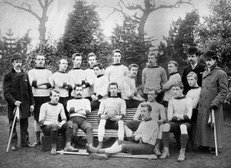 The exact origins of Handsworth Rugby Club are unclear, however, according to old newspapers, reported statements and speeches it seems certain that Handsworth Football Club (Rugby Rules) existed in 1870, a year before the founding of the Rugby Union.

They played on a field in Heathfield Road, Handsworth and had regular fixtures with Moseley and Gloucester.
During 1874-75 Handsworth appears on the fixture card of Coventry RFC. The Club then went through a lean period, before a more settled club was formed during 1886 and the Club Captain was Charlie Greener.

In 1887 the Club secured a piece of land at Brownes Green in Handsworth and the members laid the pitch and converted scaffold poles into goal posts, the changing rooms were situated at the Lamp Tavern Public House, Hamstead Road. The first President was Mr W.G.Griffiths.

During the 1887/88 season George Wade joined the Club, in June 1891 he made his first professional stage appearance as George Robey. George was to become one of the most successful comedians of the musical stage, securing the nickname of The Prime Minister of Mirth.

During the 1880s Handsworth was still part of Staffordshire, hence the adoption of the Staffordshire Knot on the Club tie. The Clubs playing shirt and colours were formally adopted at the AGM 15th September 1905, although the records show that the players had been using red and white hooped shirts since 1894.

In December 1904 Handsworth became involved in a national scandal that became known as The Parsons Affair and were fined £5 plus expenses of £8 19s 8d. The crime? Playing A T Parsons who was ineligible to play rugby union as he had previously represented Hull Kingston Rovers under the name of Robinson.

In 1905 T B Batchelor joined as a holiday member, and was the Club's only English International, playing against France in front of a crowd of 6000 at Richmond, with England winning 41 to 13.

Following the War, the Club moved grounds on a regular basis looking for a permanent home, including: Brownes Green, Worlds End Lane, a piece of land at the bottom of Hampstead Hill (changing rooms at The
Beaufort Arms Public House), Perry Barr Stadium. This period of unstability lasted until after the Second World War, when the Club were offered the opportunity to purchase a field next to the Birmingham Road, Walsall.

The Birmingham Road land was eventually bought in January 1948, and the first changing rooms were ex-army huts - soon to be known as George Lewis Erection after the purchaser of said huts.

The first game at the new ground was on 11th September 1948 against Standard Motors of Coventry. Unfortunately Handsworth lost 3-19. The first home victory was on 16th October 1948 against Hinckley, 8-3.

In March 1973 Walsall MBC finally gave planning permission for a new Club House to be built. Work began on the 5th February 1974 and was finally opened on the 15th September 1974.

On the 26th September 1986 the Club celebrated its centenary with a Centenary Dinner at the Grand Hotel, Birmingham. The Club was honoured by the prescence of AA Grimsdale, President Rugby Football Union, Mike Gibson, Ireland, PGD Robbins, England and Barbarians, two members of the Rumanian touring team and representatives from 32 clubs.

More recent highlights have been the selection of Craig Pothecary for the England Deaf XV and many TV appearances of "old boy" David Rose as a senior referee in the Premiership. Mark Liddell also refereed the 2012 County Championship Shield Final at Twickenham between Leicestershire and Surrey.

Surely the greatest recent achievement, and in the 125th season, was the victory in the final of the RFU Staffordshire Intermediate Cup (The Lewis Taylor Trophy)watched by the great man himself. A very proud day in the club's long history.