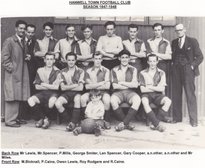 Hanwell Town was originally founded in 1920 by a team of ‘Geordies’ working in the area and it is believed that this explains the black and white striped colours which are still used today.

The club were in the London League from 1924 to 1927 and it was in this period that they won their first major honour, sharing with Roxeth and Harrow Old Boys the Middlesex F.A Junior Charity Cup in 1926. Little else is known about the club before their disbandment at the outset of the second world war.

The club reformed in 1947/1948 playing in the Dauntless League where they climbed up through the divisions earning promotion in four successive seasons. Whilst remaining in the Dauntless League with a third eleven, the club switched allegiance to the Harrow Wembley and District League where they remained until 1969/1970.During their period in the Harrow and Wembley League the club reached eight cup finals in various league and county competitions and each time finished on the losing side.

In 1970/1971 the club gained promotion to the Middlesex County League and in their very first season the club won the League cup, the side being captained by the club's current chairman Bob Fisher.

The club remained in the Middlesex County League throughout the 1970’s playing at Ealing Central Sports Ground, their home for over twenty years but in June 1981 they achieved their ambition of obtaining a ground of their own when they moved to the then derelict Reynolds Field, their current home. Thanks to a small group of volunteers the ground was able to be used from the start of the 1981/1982 season and the club was granted Senior status for the commencement of the 1983-84 season. This enabled them to join The London Spartan League and they immediately won the Senior Division to gain promotion to the Premier Division where they remained until the amalgamation of the Spartan League with the South Midlands League in 1997/1998.

In 1997/1998,their position of 12th in the League meant that in the first season of the Spartan South Midlands League in 1998/1999 that they would be required to play in the Senior Division. At the end of the 1997/1998 season Roy Nairn who had managed the side since the 1986/1987 season stood down to be replaced by former player Ray Duffy with Roy continuing his association with the club in a coaching capacity. The side immediately gained promotion to the Premier Division finishing in runners up spot to Holmer Green . Both clubs finishing with the same number of points but with Holmer Green boasting a much better goal difference.
Following this promotion, the club maintained a top half position in the League table in each season except for one in the following seven seasons. In 2002/2003 the club won the Premier Division Cup when they beat Harefield United in the final, their first cup success in ten years.
In the same season to celebrate Roy Nairn's twenty years service to the club, Chelsea sent a side to meet the club at the start of the season. The Town ran out 5-3 winners with two of the goals being scored by Martin Rowlands of Brentford & QPR and Chris Boothe of Farnborough Town, both of whom have started their careers at the club during Roy's period of managership. The Rowlands's family have very strong links with the club with dad Arthur having played for the club in the 1982/1983 season and since then all five of his sons, Adam, Keith, Martin, Stephen and Anthony have worn the club's colours with Keith now the club's record goalscorer.

In 2004/2005, the club led The Premier Division for much of the season only to suffer a dramatic loss of form in the final weeks of the season which allowed Potters Bar Town to finish as comfortable League winners with the Town in second place. In season 2005-06 with promotion to level Four a key objective, the club managed to finish in third place just edging out Harefield United on goal difference Two-thirds of the way through that season Ray Duffy resigned and was replaced as joint managers by his former assistant Danny Vincent and former player Pat Gavin. Third place enabled Town to win promotion to The British Gas Business Southern League for the 2006/2007 season. However, Town's stay in the Southern League only lasted one season as they finished second from bottom and were relegated back to the Molten Spartan South Midlands League. During their stay in the Southern League, Town parted company with the management team of Vincent and Gavin with the reins being taken over by former player Chris Boothe, who himself resigned at the end of the 2007-08 season. The club finished in seventh place in the Premier Division of the Molten Spartan South Midlands League in the 2008-09 season and in 12th place in the 2009-10 season.

There was a further change in the managerial team at the start of the 2010-11 season with Boysie Wise departing and Jason Tucker stepping into the role of assistant manager to the club’s leading goalscorer Keith Rowlands. After a very promising start to the season, the side fell away drastically at the end of the season eventually finishing in fifteenth position, the lowest spot that they have occupied since gaining promotion to the division at the end of the 1998-99 season. The club continued to struggle in the 2011-2012 season and midway through the season, the club reluctantly accepted the resignations of club stalwarts Rowlands and Tucker. They were replaced by a new managerial team of Tommy Williams and Luke Evans. Despite results improving, the club were unable to climb out of the relegation zone and faced relegation but the demise of clubs at level four resulted in Town being reprieved from relegation. At the end of the season, both Williams and Evans resigned their managerial roles and the club turned again to Ray Duffy to hold the managerial reins for the 2012-13 season. He was aided by Mark Adams and Vince Perdue. The club enjoyed a successful season finishing in 6th position and looked forward to the challenge that a new season would bring. Season 2013-2014 turned out be the most successful in the club's history as they won The Spartan South Midlands League by a margin of fourteen points over Ampthill Town. They were beaten just once in their forty-two games, drawing six and winning the other thirty-five with a goal difference of ninety-one, having found the net one hundred and twenty-seven times and conceding just thirty-six. They also reached the fifth round of the FA Vase for the first time in their history, losing 3-1 to league rivals Ampthill Town after extra time having had to play their fourth-round tie against Ashford Town just thirty-six hours previously on Thursday evening.

Promoted back to the Southern League Central Division, the 2014-15 season proved to be another very successful season for the club as playing at their highest ever level and aware that there only previous season as a level Four club had resulted in immediate relegation, they not only held their own but finished in seventh place, just outside of the playoffs. They also reached the final of The Middlesex Senior Cup for the first time in their history, a penalty in the final minutes proving to be a 1-0 defeat to Harrow Borough . Unfortunately, club manager Ray Duffy tendered his resignation at the end of the season so the club started afresh in Season 2015-2016 under the managerial reins of Phil Granville, a former player and manager of Uxbridge FC and more recently manager at Harefield United. However, things did not work out as expected and Granville was relieved of his duties at around Christmas and Duffy, fresh from his break, returned to take up the reins. It proved to be a stressful run into the end of the season and only two 1-0 wins in the space of forty-eight hours against Uxbridge and Ware respectively prevented the club from being relegated.

With the management team having had the time to rebuild the squad over the close season, the 2016/17 season proved to be one in which the club held a relatively comfortable mid-table position throughout and hopes are high that the 2017/18 would see the club finish higher up the table. However, it was not to be with the club finishing too close to the bottom of the table for comfort. At the end of the season, manager Ray Duffy who had been involved in 997 games for the club as either a player or a manager tendered his resignation and the club commence the 2019/20 season with joint managers in Chris Moore and Wayne Carter.

Since arriving at Reynolds Field, the club has steadily improved the facilities with the installation of floodlights in 1989, the erection of a small stand and more recently, thanks to a grant from The Football Foundation, the erection of a stand and toilets for disabled persons. During 2005-2006 to ensure that the club met The Football Association's ground grading requirements, the seating capacity of the stand was extended to 180 seats and covered terracing was erected behind one of the goals. That this work was possible was entirely due to the generosity of the club's president Dave Iddiols and the club's then sponsor Gowing & Pursey Ltd.

Tottenham Hotspur led by the Republic of Ireland international and current Brighton and Hove Manager Chris Hughton and managed by former England goalkeeper Ray Clemence were Town’s first opponents under lights and since then Spurs again, Chelsea, Brentford, and QPR have all played games on the ground.

At the end of the 2004/2005 season club chairman Bob Fisher was awarded a medallion by The Football Association in recognition of his fifty years service to the club and very recently, Bob, completed sixty years service at the club, a remarkable achievement, which was recognised by the club in naming the stand after him

The club has a thriving Youth Section and this season will be fielding over 20 Youth sides, Both the Senior Club and Youth section has achieved charter standard and are highly regarded in the county and the local community.

The club has been enormously fortunate over the years to have benefited by the commitment and effort of so many to ensure that the club survived and prospered. There are too many to name them all but special mention should be made of the Conn family, Jim, Mike and Jack, the Haynes family, Les, Stan and Reg, the Rowlands family, the Swift family, Bob, Stuart and Kenny, Sam Kelso, Phil Player, John Wake. Phil Scott, Roy Nairn, Ray Duffy and of course Dave Iddiols but no history of Hanwell Town would be complete without a mention of the club's secretary from its reformation in the 1940s to 1988, Ron Walker. Without a home ground of their own for the majority of this period, Ron's total dedication and commitment meant that the club were able to keep going whilst many around them folded. Until he passed away at the age of 90 in November 2011, Ron continued in his role as a trustee to take a keen interest in the club's fortunes.