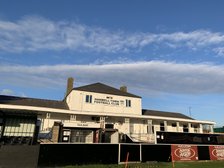 CHRIS MOORE- Joint Manager Started the 2017/18 season as the Egham Town manager with Wayne Carter as his assistant. This role ended in January 2018 and he decided to restart his playing career at Hanwell. He made 16 appearances for Brentford as a full time professional and also played for Dagenham & Redbridge, Northwood and Uxbridge for whom in three different spells he made over 200 appearances. At the end of the 2018-19 season together with his colleague Wayne Carter took over the managerial role from his predecessor Ray Duffy who had clocked up over 950 games in charge. Since taking over the managerial reins with Wayne has impressed everybody with his enthusiasm and professionalism.

WAYNE CARTER -Joint Manager- Joined the club in February 2018 following his departure from Egham Town where he was working alongside Chris Moore in a coaching role whilst continuing his playing career. He then appeared in every game until the end of that season . He made limited appearances last season and is not likely to feature too often in this season's line up. A vastly experienced player with enormous ability on the ball. he has played for a number of clubs in his career including Wealdstone, Northwood, Hendon and Uxbridge.
Since his arrival, he has impressed everybody with his passion and dedication to the club.

STUART EVERLEY- Physio- Stuart was coaxed out of retirement by the managerial team having spent almost his entire career with Uxbridge. Having thoroughly enjoyed his first season with the club, he is not quite ready to retire (again) just yet.

SCOTT EVERLEY- Physio- Joins his dad Stuart as club physio. Scott studied Sport and Exercise Science at Portsmouth University and has been with the Geordies for 3 seasons.

DEAN SMITH -Coach. Dean works for The Premier League and is a fully qualified coach with a very large amount of experience. His role elsewhere limits his time with the club but he has been a huge help to the management team during pre-season.

PAUL RIORDAN-Goalkeeping Coach A former goalkeeper for the Town and then for Northwood FC. Has just joined the management team.

Harry Rush - Harry joined us midway through the 2018/19 season having excelled again us when playing for Harrow Borough Under 23's in a game that finished up with the amazing score of 8-6. Harry notched a couple of these for Harrow. He immediately claimed a regular spot in the team as an industrious midfield player with an eye for goal. He took a step up in 2020, where he played for Kings Langley but returned to the Geordies before the season was curtailed.

Hugo Sobte - Heading into his second season with Hanwell, Hugo joined from Windsor where he played for 4 seasons, 2 of those as Club Captain. Prior to Windsor Hugo was at a number of academies such as Reading, QPR, Crystal Palace as well as Chelsea where he played for 3 seasons along with England Stars Mason Mount and Declan Rice. A strong, commanding keeper who distributes balls with pin point precision. Hugo ended last season with both the Players’ player and Supporters’ player awards.

Dan Carr - A recent addition to the squad joining at the start of the season from Bracknell Town who he score 12 goals for last season. Before joining Bracknell, Dan was a scholar at Oxford United where he spent 4 seasons. A quick winger who often puts cracking crosses into the box !

Will Wambeek - Into his second spell at the club, Will rejoins us from Potters Bar. A versatile defender who made 18 appearances for the Geordies in our 2018/19 campaign. Will has also played for Uxbridge for three seasons prior to his move to Potters Bar.

Dwayne Duncan - Dwayne joined the club mid-way through the 2018/19 season, since he has been ever present in the back 4. He has previously played for Chesham United,Potters Bar and Harpenden Town, remarkably as a central defender he scored 15 goals for Harpenden in their 2017/18 campaign. Dwayne loves a header and has scored a fair few for the Geordies over the past couple of seasons.

Andy O’Brien - A tall and commanding defender who joined us from Greystones United (Ireland) after accepting a job in London. Now into his third season, Andy was an instant fan favourite after he was awarded man of the match on his first game for the Geordies. Andy then went on to score the following Saturday in his first game at the Powerday. His claim to fame was when he appeared on Liverpool FC TV and was gifted a pair of size 12 boots from Virgil Van Dijk.

Joel Jacobs - Heading into his second season Joel is a strong, experienced defender who can list his previous clubs as Bracknell Town,Egham Town, Flackwell Heath and Chalfont St Peter. A dead ball specialist with a sweet left foot, Joel loves a free kick!!

Jack Waldren - Jack is now into his third season at Hanwell, he’s impressed all with his pace and excellent balls into the box. Jack has previously played for Hemel Hempstead, Harrow Borough and Kings Langley.

Toch Singh - Toch joined the Geordies in September last year, after missing the beginning of the season with a fractured foot. After being awarded man of the match on his first game Toch has been a fan favourite ever since. He is a strong and very experienced midfield player who is a great asset to the team. Toch can list his previous clubs as Glebe, Sporting Bengal, Tilbury, Romford and Basildon United. Toch has also represented the Panjab FA at 2 CONIFA World Cups.

George Nicholas - George joined us at the start of the season from Potters Bar. An impressive signing George has been ever present in the Hanwell squad since his arrival. Starting out at Hemel Hempstead Under 18’s George impressed a Notts County scout watching on and soon signed a professional contract, he traveled to Italy with them where he played in the famous fixture against Juventus. George lists his previous clubs as Wealdstone, Northwood and Potters Bar.

Gianni Crichlow - A clever midfield player who is rapid, Gianni joined the club last season and since then has made quite an impression. After a recent injury Gianni has come back fighting fit and scored one of the goals of the round in our FA Cup match against Hayward’s Heath earlier in the season. We hope he can score a few more too!

Harvey Killeen - Nearing on 100 appearances for the club Harvey has been at the club since he was 14. A regular in the first team aged 17. A clever player who is a lot stronger than his slender frame suggests. Last season Harvey trialled with the QPR u23 team but an injury halted his progress. After an impressive pre season we hope Harvey can enjoy a injury free season.

Ash Nzala - New this season Ash caught our eye when we played Cheshunt a couple seasons ago. He managed to put two past us that day, later that season Ash was part of the Cheshunt squad to get promoted into the Isthmian Prem. Ash was unlucky with injury last season after breaking his leg in pre season, he came back 7 months later - after scoring in his first game back the joy was short lived as football was then cut short by the pandemic. We are excited to see what he can bring to the team this season. Ash can list his previous clubs as Burgess Hill, Southall, Hayes and Yeading and Cheshunt.

Jack Hutchinson - Jack rejoined the Geordies last season after a playing for the club in 2016. Jack is a clever midfielder who worked tremendously hard throughout the lockdown period, this showed in pre season as he came back stronger and sharper than ever! Jack was part of the Wealdstone side who gained promotion into the National League in 2014. Jack has also played for Beaconsfield Town, Staines Town, Ware and Chalfont St.Peter

Ogo Obi - Ogo joined the club towards the end of last season, he scored 7 goals in 7 games for the Geordies before the season was cut short. He began last season at Hayes and Yeading before his move over. Prior to that Ogo was signed professionally with Watford and Cardiff City. After scoring a fair few goals already this season we hope he keeps it up!

Trevan Robinson - A new addition to the squad raising from the Under 18 squad. Trevan has impressed all with his rapid pace and quick play. We look forward to seeing what we can bring to the team this season.

Gareth Chendlik - Another player who is nearing 100 appearances for the club, going into his third season at the club Gareth ended the 2019/20 season as our club top scorer. A injury early this season left him out for a month or so but we are excited to see him out on the pitch again! Gareth has previously played for Dorking Wanderers, Hemel Hempstead and Harrow Borough.