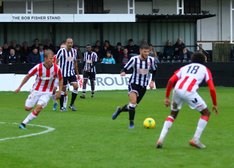 Town were a trifle unfortunate not win and progress into the third round against their skilful young opponents, the current holders of the trophy. Two goals to the good in under eight minutes, and almost going three up minutes later, Hanwell had ‘come out of the traps’ with the same urgency that the England rugby team had earlier in the day. However, Town’s inability to win a penalty shoot-out, once again, cost them dearly at the end of the day.

The game had started with Harvey Killeen being brought down when in full cry, and it was poetic justice when Dwayne Duncan rose well to head in Harry Rush’s free kick off a post. Five minutes later left back Mads Roersley slipped on the greasy surface, enabling Gianni Crichlow to race fifty yards before finding Harry Rush, who controlled the ball and drilled it into the bottom corner from the edge of the area. Within a couple of minutes it could have become three nil. Dave Taylor put Gianni through, and the wide man was only prevented from scoring by an athletic, full-length save from Patrik Gunnarsson. Five minutes later the Brentford ‘keeper was called into action again, but this time it was only to make an easier save at the near post from Harvey’s low drive.

Unluckily for Hanwell an injury to the experienced Brentford right back Josh Clarke forced a reshuffle in the visitors’ line-up that seemed to blunt Hanwell’s attacking edge. David Titov moved to left back and proved a lot more effective against Gianni than Roersley had. The visitors began to get much more possession, looking particularly effective when Julien Carre was on the ball. A wasted free kick for Hanwell enabled Brentford to break up-field and Joe Adams went close to pulling a goal back. Just after the half hour a long range effort from Jaako Okansen forced a spectacular leap and save from Hugo Sobte. His clearance however was won by the visitors and Adams’ low ball into the area was slid into the net by Okansen after being deflected. The goal inspired the Bees and before the half-time whistle Both Gustav Morgensen and Jayden Onen put headers wide with the latter player also scraping the outside of the post with a good effort.
Hanwell began the second half on the front foot and Tayshan Hayden-Smith found Harry with a neat flick, but the midfielder’s powerful volley flew well over. The visitors responded immediately and Dwayne did well to nick the ball off Morgansen’s toes as he prepared to score. Ten minutes later it was Kieran Cathline’s turn to clear the ball away under severe pressure. Although Brentford were having the greater share of possession much of their passing was in their own half and did not threaten the Hanwell goal.

Hanwell were much more direct, and substitute Jeremiah Maja almost made an immediate impact, getting the better of centre-half Japhet Sery Larsen before sending over a dangerous cross that Kane O’Connor did well to clear. Up the other end Larsen failed to convert a good chance from a corner. With just fifteen minutes to go the visitors equalized when Christian Tue Jensen curled in a long range free kick at the near post. Hanwell came roaring back and substitute Callum Woodcock was racing towards the penalty area when he was set flying by an ill-timed challenge by O’Connor. The referee straightaway showed him a red card. Hanwell had the ball in the net from the ensuing free kick, after Gunnarsson had spilled the ball, but the goal was mysteriously disallowed. The Bees’ keeper then saved well from Harry after which Jeremiah followed up to hit the post. From the following corner Andy O’Brien’s downwards header was clipped on to the cross-bar. As the game approached added-on time Jeremiah broke through, forcing another save from Gunnarsson. The follow-up shot struck a Brentford arm, which was adjudged ‘accidental’ by the official. In the extended added-on time, owing to the lengthy treatment required after a game-ending challenge on Harvey, both sides could have snatched a winner. For Hanwell, Harry fired narrowly over from distance, while Hugo did well to keep out both Adams and Jensen for Brentford.

The Middlesex Senior Cup sensibly goes straight to penalties after ninety minutes, and Hanwell, for the third time this season, lost out. Although Dave Taylor and Harry Rush converted for Town, Tayshan and Dave Thomas had their efforts saved. Brentford scored four of their five and it was all over. The holders now go on to the third round, and Town are once more left rueing missed penalties in a cup competition.