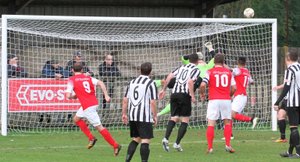 Fielding a side that showed several changes following the mid week defeat by Cockfosters, with the most notable being the appearance of Michael Buckley signed on a joint registration from Wingate & Finchley.

After a minute's silence impeccably observed for Remembrance Day, the game started at a lively pace and in just the fourth minute, Uxbridge's Mitchell Wiseman was shown a yellow card as he cut down Harry Newman in full flight. Eleven minutes had elapsed before the first goal scoring chance of the game came along, Uxbridge's Reece Grant shooting wide after a free kick by Dave Thomas. Another free kick by Thomas was met with a fierce header by Matty Woods but Cain Davies made a tremndous save. At this stage of the game, Uxbridge looked much the more likely side to break the deadlock and an excellent run by Grant saw him pull the ball back into the path of Wayne Carter but Andy Caton bravely blocked Carter's shot.

In what was rather an isolated raid we almost took the lead in the twenty fifth minute. An excellent pass by Harry found Tyler Christian-Law in space and he cleverly lifted the ball over the advancing Paul McCarthy in the Uxbridge goal but Ben Peden got back to clear from the goal line.

Cain then made another excellent save, denying Jon-Jo Bates after he had been set up by Woods Ten minutes before the interval, Uxbridge scored what proved to be the winning goal. From Carter's corner,Grant headed the ball goalwards. Harry Newman cleared from the line but as Grant went to retrieve the ball he was fouled right on the edge of our penalty area and a free kick was awarded. Carter expertly looped the ball over our defensive wall into the far corner, leaving Cain helpless. Mark Denninson became the second Uxbridge player to be booked when he needlessly kicked the ball away just before the interval.
We came more into the game in the second half and Tim Ensmann headed wide early in the half from a cross by Tyler but it was Uxbridge who always looked more likely to score and a good move down the right by Carter and Bates set up a chance for Woods but his fierce cross shot was turned aside by Cain. Shortly after Ben Gill had picked up a yellow card for an innocuous
tackle, Tom Hunt came on to replace Tyler. As the minutes ticked away, Peden made a great run from inside his own half but Cain was on hand again to deny Woods after Peden had played the ball into his path.
We had another half chance at the other end when from Ben's corner, Ryan Kinnane headed the ball back into the goalmouth but Tim headed it over.
Our final substitution came six minutes from time with Denilson Vincente replacing Ryan Ashe and in the final minute, Buckley became the fourth player to find his way into the referee's notebook.