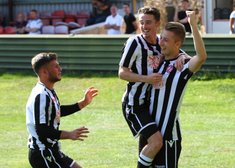 This was a vital result for Town after the disappointment of the dramatic and emotionally draining exit from the F.A. Cup last Saturday. The three points acquired keep the Geordies level on points with Westfield and Tooting & Mitcham at the top of the South Central Division.

For the first couple of minutes Hanwell saw a lot of the ball but the earliest goal threats came from the home side. Hugo Sobte was called upon to dive at Kweku Lukan’s feet after which the speedy striker went close, when meeting a cross from former Geordie Louis Bircham. Hanwell then threatened when skipper David Taylor won the ball and found Harvey Killeen, who in turn, put Harry Rush through on goal. His shot, however, was easily kept out by ‘keeper James Hoskins. Almost immediately Kieron Cathline, starting into central defence to cover the missing suspended players, made a last-ditch tackle to deny Lukan a point-blank shot on goal.

Lukan was proving to be a difficult handful and once more it was Kieron to the rescue when the striker sent a dangerous, low cross into the box. Up the other end Gareth Chendlik did well to set Harvey through, but the winger’s shot was comfortably held by Hoskins. David then, under pressure, headed a well-flighted Joel Jacobs’ free kick wide of the Northwood goal. The game was an end-to-end affair, and Northwood’s Andrew Tirivanhu struck the post when up for a set piece. The ball found its way to Lukan whose goal-bound shot was cleared off the line by Callum Woodcock. Hugo then made a great save but a flag indicated that it had not been necessary. Hanwell then went close but Gareth’s well-executed ‘over the shoulder’ shot went straight to Hoskins.

As so often happens after a lively start the game went into a quiet period and it was not until approaching the thirty-fifth minute that anything noteworthy happened. It began when the referee played on after Bircham, who was on the end of a hard challenge, went down. Northwood were in the final third of the pitch and played on for some time. Hanwell eventually won the ball, and, to howls of ‘Put it out’, from the home supporters, went up-field. The ball reached Hoskins who kicked it into touch. Joel threw the ball to Harvey, got it back and crossed to Gareth, who netted. The controversial goal was allowed to stand, to loud protests from the home players and supporters. A minute later Town could have gone two up when a low ball into the box by Maxwell Oldham just eluded both Gareth and Harry in a crowded area. Tayshan Hayden-Smith then found Gareth, but his lob sailed well over the bar. Harvey and Harry then combined well but Hoskins denied the latter.

Just as Hanwell’s goal had been hotly disputed, so was The Woods’ equalizer. As Callum moved to clear the ball it bounced awkwardly and appeared to hit his arm, and the referee immediately pointed to the spot. Skipper Alex Witham made no mistake from twelve yards and the scores were level. However, the half still had a sting in the tail, in added-on time. Kieron made a strong run forward and found Harry, who was tackled for a corner. Moments later the same two combined again with Harry’s corner being directed into the goal by Kieron.

Hanwell began the second half strongly but Harvey was unable to get to Gareth’s well-directed cross. A deep cross by Callum and a free kick from Harry both failed to find takers. As the hour approached Harvey was unceremoniously brought down by Tirivanhu as he raced through on goal. The defender was then shown a red card. Substitute Liam Tack then combined well with Harry but the former shot into the side netting from an acute angle. Harvey was proving to be ‘a thorn in the side’ to the home team and when he was bundled over in the area the Hanwell travelling supporters fully expected a penalty, but the man with the whistle did not agree! The play was going from end to end and, following a corner, town broke with a numerical advantage but wasted the opportunity.

Substitute Terlochan Singh then found Harry, who, in turn, found Harvey but the home defence got the ball away.

As the match entered added-on time Andy O’Brien did extremely well to get his head to a cross with home forwards in position to score if he had not made the interception. From the ensuing corner the ball broke to late substitute Jeremiah Maja, who played the ball through to Harvey in full stride. The wide man raced fifty yards and fired the ball into the far, bottom corner to seal the victory, to the vociferous joy of the ‘Hanwell Massive’ behind the goal. It was a well-earned three points against a team whose performance belied their lowly league position. Town now look forward to Tuesday evening’s match against FC Romania prior to a matchless Saturday, as scheduled opponents, Staines Town, have a cup tie to play!