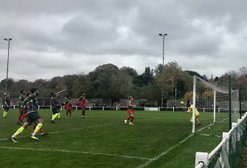 Our tremendous unbeaten run of nineteen away league games dating back to 2nd March 2019 came to a grinding halt when we were beaten 1-0 away at Chalfont St Peter.
One would have hoped that our record would have been broken after a pulsating thrilling game in which we might have been unlucky to lose. But this certainly was not the case in this game as we produced the most inept display against a young Chalfont St Peter who were worthy winners and had it not been for keeper Hugo Sopte, the margin of defeat could have been higher.
What was also bitterly disappointing is that a number of new followers of our club since the Covid19 restrictions came into place made the relatively short trip to Chalfont only to witness such a poor performance.
Our side showed several changes from that which had played against Northwood earlier in the week. With Andy O'Brien unfit, Will Wambeek moved into a central defensive slot alongside Dwayne Duncan with Dan Carr returning into the right back position. With the management team deciding to return to a 4-2-4 formation, Toch Singh and Danny Julienne, lost their midfield places with Jack Hutchinson and Harvey Killeen starting whilst new signing Marcus Mealing came into partner Ogo Obi upfront. Ashley Nzala joining Toch and Danny on the subs bench.
It was clear from the start that the stiff wind and slightly uneven playing surface would be unlikely to produce an attractive game of football and so it proved but of the two sides, Chalfont made much better use of the conditions. After a drab opening fifteen minutes, Chalfont almost took the lead in the fifteenth minute when a free kick from the right was driven across the face of our goal. Hugo palmed the ball away but it was immediately driven back across the face of our goal from the left and it would only have needed the faintest of touches fro it to have found the back of our net. It was not until the twenty fifth minute that we had our first shot at goal. It came from full back Joel Jacobs from distance but it failed to trouble the home keeper, Andy McCorkell as the ball flew over the crossbar. At the half hour mark, Hugo made a tremendous save from a point blank range header which had it beaten him would not have counted as the linesman's flag was up but it was a highlight in a drab half. Hugo then turned a close range shot from Kai Walters around his near post.

My notes at the time said that we had not strung together two passes in the game but then Harvey found Ogo but he was forced wide and his cross shot was turned aside by McCorkell. We then did find the net after Jack Hutchinson, one of the few who could not be criticised for his performance played in Ogo but the linesman's flag was up.
We began the second half with much more urgency about our play and had a chance when the ball came out to Harvey on the edge of the penalty area but he shot wildly over the bar and then shortly afterward, George Nicholas, found himself in a similar position but again the effort went high,wide and not so handsome. Midway through the half, Gareth Chedlik returning from injury replaced Mealing, and then with fifteen minutes remaining, Ogo Obi who was hardly ever in the game, such was the soundness of the Chalfont back line,was replaced by Ashley Nzala.

A good run and shot by Owen James for Chalfont was saved by Hugo and as the minutes ticked away, our thoughts that we would be grateful to settle for a point became more forceful especially as we squandered our last chance to get a late winner when a long ball from Hutchinson found Gio in space on the left but his low cross into the box went straight into the arms of McCorkell.
In the eighty ninth minute came the decisive moment in the game. Cutting in from the right onto his favoured left foot James got around Joel and then was brought down by Will Wambeek as he moved into our penalty area. The lack of protests signalled that the decision was correct. James picked himself up and made no mistake from the spot to earn Chalfont the three points. Shortly afterward the final whistle was blown and we were left to reflect on our dismal display.