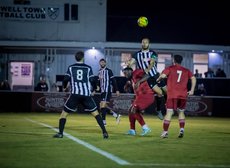 Both sides came into the game on the back of going out of The FA Trophy following penalty shoot outs just seventy two hours previously, but there was no suggestion of any hangover in a fast and furious start to the game.

Town made just one change from that which had commenced the game against Aveley with Gianni Crichlow returning to the starting line up in place of the injured Trevan Robinson. In contrast, Northwood had strengthened their starting line up with the introduction of Billy Adcock and Reece York on duel registration from Chesham United . Adcock, a former Hanwell player was arguably the best player in the game working tirelessly in Northwood's midfield. Also in the Northwood line up were two other former Hanwell players, Dave Thomas and Ryan Phillips.
Before another healthy crowd of 209 and on a perfect playing surface, play switched from one end to the other in the opening stages but neither side were able to create a goal scoring opportunity with defences in command.

Midway through the half, from a corner swung into the box by Joel Jacobs, Ogo Obi had a shot blocked, and his follow up shot was blocked also. Northwood's Yianni Constantinou then had an excellent run from his own half straight at our back line and we were grateful for an excellent tackle by Joel as Constantinou raced into our penalty area. As the minutes ticked away and without either keeper having made a save of any note, it seemed certain that the first half would finish 0-0 but a minute before the interval, Ashley Nzala challenged for a ball midway in the Northwood half but in the centre of the pitch. The ball bounced in our favour and Ogo raced away to tuck it path the advancing Northwood keeper Hafed Al-Droubi into the Northwood net to enable us to go into the interval with a one goal lead. Ogo has now scored eleven goals this season and this was the third successive game that he had found the net.
Immediately after the interval, Ogo almost scored again as from a free kick just outside the penalty area to the left of the goal he swung his kick in over the wall and the ball hit the side netting much to Al-Droubi's relief as he was nowhere to be seen as the ball swung goalwards. We then had an excellent chance to increase our lead. From a long ball forward from keeper Hugo, there was a mix up between Al-Droubi and a Northwood defender when challenged by Ogo and the bouncing ball reached Gianni with the keeper stranded, but Gianni was only able to loft the ball high over the vacant Northwood net. Just before the hour mark, both sides made their first substitution, Harvey Killeen coming onto replace Ashley Nzala whilst George Isaac replaced Daryl Bryan-Samuels for Northwood.

Harvey's appearance being immediately welcomed by several of the very young youth team players who he coaches and who had been getting concerned at him remaining on the bench for such a large period of time.
However, it was Isaac who had an immediate impact. After another excellent run by Constantinou, the ball was flicked on and suddenly Isaac was through on goal with only Hugo to beat and he made no mistake, steering the ball past Hugo into the far corner of our net. Almost immediately we wasted a chance to equalise when an excellent crossfield pass by George Nicholas found Gianni unmarked out on the left. Gianni cut inside onto his right foot but then fired the ball high, wide and not very handsome.
As the game progressed so we became the stronger side and looked much more likely to score than our opponents. In the sixty fifth minute, a cross from Gianni found Ogo's head but the ball was scrambled clear from the goal line with the keeper beaten. We made our second substitution with Jack Hutchinson replacing the tiring Danny Julienne in midfield and then Ryan Esprit came on for the injured Ryan Phillips for Northwood. With ten minutes remaining, we did have the ball in the Northwood goal when from a free kick by Joel, Andy O'Brien headed the ball back across the goal to Dwayne Duncan who headed home but the assistant referee's flag went up immediately for offside. Harvey was becoming more and more influential down the right side as we almost camped ourselves in the Northwood half and again a defender was positioned to head Harvey's shot away from the goal line with Al-Droubi beaten. In the ninetieth minute we should have won the game, with Harvey playing Gianni in but somehow with only the keeper to beat, Gianni missed his kick completely and the chance was gone as were the three points on offer as the final whistle was blown.