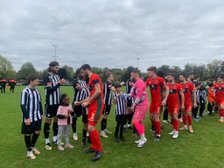 The start of this game was proceeded by a minute’s applause for former Hanwell Town player Syd Gray who has recently passed away. Syd had become a regular attender at our home games in recent years and he will be greatly missed. Our condolences go out to his wife and daughters.
Our squad was exactly the same as that which had figured in our excellent mid week win at Marlow whilst South Park arrived after having beaten Tooting & Mitcham United in their mid week league fixture.

All of those attending The Powerday Stadium in recent weeks can have had no complaint about the lack of goals with eleven goals scored in our meeting with Staines and six in the game against Sutton Common Rovers and this game proved to be no exception as will be seen as you read on.
We made an excellent start and seemed likely to score when a ball was played into the path of Ogo Obi as he raced through the middle but a fine retrieving tackle by the South Park skipper Matthew Fairhorn halted his progress. South Park’s Domingos Pires then received a yellow card as he tugged back the short of Omar Watt-Ndongo who was making his home debut for us.

At this juncture we were not to know that Pires’s yellow card was the first of the six yellow cards to be issued alongside the two red cards issued to South Park players. The odd thing about this being that Pires committed a series of fouls before the final whistle and yet was still on the pitch at the end of the game.

Completely against the run of play in the early stages, South Park took the lead in the tenth minute when an excellent cross field diagonal ball by Alex Laing found colleague Ibrahim Jalloh in a one to one situation with Andy O’Brien, Jalloh’s speed took him clear of Andy and he found the far corner of our net with an excellent finish. Five minutes later, South Park were two ahead and again the scorer was Jalloh but this time on the opposite side of the pitch but again it was a precision finish. Our thoughts immediately went to the Staines game when we were four down in the opening seventeen minutes but to our credit our response was immediate. An excellent move down the right culminating in George Nicholas playing the ball though into the path of Dan Carr saw Dan drive the ball across the South Park keeper Sam Freeman into the net.

We then dominated the game for long periods and it is difficult to understand how we did not at least draw level or take the lead as twice from free kicks by Harry Rush, one of which followed a great run forward by Harry, the ball bounced around in the South Park penalty area but some excellent blockages and last ditch tackles saw the ball cleared to safety. When we did get a shooting opportunity, Adam Laaref’s effort went straight at the keeper whilst Dan blazed over the bar. It was completely against the run of play when South Park went further ahead.

A break from mid field by South Park’s Adam Aziz saw him shoot straight at Hugo Sopte but somehow the ball squirmed under Hugo’s body and despite him retrieving the ball immediately, the linesman’s opinion that the ball had crossed the line was accepted by the match referee and we were two goals down. Shortly before the interval, we were fortunate not to go further behind. Laing on loan from Horsham with Jalloh in acres of space unmarked to his right opted to shoot from distance when a pass would have put his colleague right through on goal.

We made a substitution at the interval with Tomasz Szmienczuk coming on to replace Omar as we switched to playing two strikers down the middle. However, for some reason we made a very listless start to the second period and the game seemed to be going nowhere until the sixty second minute when he scored again. At last we got some reward from Harry’s free kicks as we saw the rarity of a headed Ogo Obi goal as he flicked on the ball from Harry’s kick into the corner of the South Park net. Minutes later, one of the two South Park central defenders Joe Bell was sent off as he needlessly hacked down Tomasz with the ball close to the corner flag right under the linesman’s nose. From the free kick there was again a scramble in the South Park goalmouth which culminated in keeper Freeman palming the ball over the bar.

We equalised in the seventy second minute when from yet another Harry cross, this time from a corner, the ball bounced across the goalmouth and Calum was on hand to head home. With South Park sitting back with everybody behind the ball we enjoyed lots of possession but failed to create any clear opportunities with the South Park keeper rarely under any great pressure. We made another change with Brendan Matthew replacing Jack Hutchinson and Brendan almost notched what might have been the winner but Freeman made an excellent save. After numerous warnings, Freeman was at last booked for persistent time wasting which resulted in six minutes being added on at the final whistle. Just before that was blown, Laing became the second South Park player to be sent off as he clashed with Andy O’Brien and he did little to support his case by the volume of abuse directed at the match referee as he left the pitch. Further minutes were added as the South Park manager was yellow carded and around ten minutes of added time were played before at last the final whistle was blown. For South Park it was a point that they were fortunate to earn but for us it was two points lost.