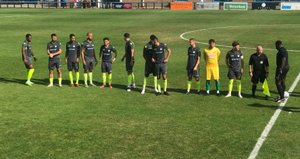 Fielding a side that showed seven changes from that which had played against Fleet Town the previous game, we gave an excellent account of ourselves against a side playing at two levels above us, National League South, in the non-league footballing pyramid Welling United. Fortunately, we had been able to change the day of this game from the likely Tuesday night to a Saturday, such were the traffic problems experienced in reaching the ground.

A disappointing crowd of 179, based on Welling’s normal home attendances watched an evenly contested game that was eventually decided on a penalty shoot out. The opening stages of the game were played at a fast and furious pace with play flowing from end to end. During this period we created the better chances with Harry Rush just failing to turn home a low cross from Obi Ogo and then from distance, Harry Rush fired over the bar. Jack Beadle should have done better than to fire wide after being put through by Harry and then an ambitious effort from Obi sailed high wide and not so handsome. Having weathered this early period, Welling began to carve out chances for themselves and our debutante goalkeeper Damian Pawlak made a great save from a fierce shot by Ade Shokunbi powering in from the right flank and then getting up to make a flying save from Bradley Stevenson’s follow up.

Welling took the lead in the 24th minute when  Aaron Barnes went on a marauding run down the right wing and put in a low cross that was turned home by Ben Allen at the far post. Shortly after Barnes went on another strong run but Damien saved his shot at the near post. We then fought back strongly and until the interval were in command of much of the game. Jack cut in from the right but his shot was blocked by home keeper Tom Smith. Shortly after Smith failed to get to Harry’s free kick lofted to the far post and his attempted punch clear only saw the ball rebound of the back of a defender and then bounce wide of the unattended net. We then did find the back of the net when a corner was headed goalwards by Edon Pruti and the ball was turned home by Tomas but he was adjudged to be offside. On the stroke of half time, Smith was again called into action making an excellent save from Kai O’Brosnan.

It was an untidy start to the second half with frequent stoppages and the physios on and off. During this period Obi fired over after a good ball played into his path by Toch Singh. Good build up play between Welling’s Stevenson and Che Kabbendam presented an opportunity for Kristian Campbell but he curled the ball just over the bar. We then almost equalised when another header by Edon was scrambled off the line. On the hour mark we made our first change, Brendan Matthew replacing Tomasz and not much later Adam Laaref came on for Jack.  We were now once again the more threatening of the two sides and we deserved our equaliser which came in the seventy ninth minute. Ogo cut in from the left and from seemed to be a very tight angle fired the ball across Smith into the far corner of the net. Shortly after Ogo in a better position than for that when he scored our goal, shot wide.

Following on after the scrappy start to the second half, there were seven and a half minutes of added on time but neither side was able to break the deadlock and with no replays or extra time in The London Senior Cup it was straight to a penalty shoot out.
Ogo was the first up for us and he made no mistake and when Allen shot high over the bar for Welling our hopes were high. Brendon Matthew made it 2-0 to us before Braley Stevenson scored for the home side. The Welling keeper Smith then diving to his left palmed away Harry Rush’s effort and Che Krabbendam made it 2-2. Toch Singh was the next to find the net for us with Kristin Campbell equalising so it was all one the final two. Smith made another excellent save to deny Edon Pruti leaving Kaylen Hinds with the opportunity to send Welling through to the next round which he did with aplomb much to our disappointment.