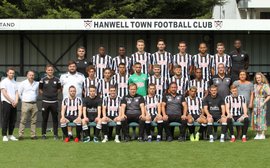 For the second time in eight days Town acquitted themselves well in a cup competition against a team from two levels higher in the football pyramid, in neither case progressing to the next round.

The first half of this F.A. Cup tie ended goalless, with neither team creating any gilt-edged chances. The visitors had the greater share of the ball and, despite some neat passing, did not over-trouble Hugo Sobte in the Hanwell goal. This was largely due to some stout defensive work by the Town rear-guard. Andy O’Brien blocked a powerful effort from Charlie Walker, the wall held firm to deny a free kick and George Nicholas charged down an on-target effort from Chris Whelpdale. Up the other end Town’s best chance came when Ogo Obi played in Dan Carr who was very robustly challenged when well-placed to shoot.

The final minutes of the first half saw Eastbourne creating rather more. Hugo did well to beat Dominic Hutchinson to a through ball, Charlie Towning flicked over the bar when well-placed and Whelpdale headed over.
The second half proved to be more entertaining than the first. Early on Whelpdale fired the ball across the goal but just wide of the far post. Shortly afterwards Dan drifted in from the left and forced a save from Eastbourne custodian Lee Worgan at the far post. A minute later Hugo was called upon to save well from Walker. Then it was Romario Jonas’ turn to keep out the Sports, bravely heading away under heavy pressure. Eastbourne had their tails up now and the ball was being fired into the Hanwell penalty area too often for comfort. Hugo blocked an effort from Jack Currie at the near post and came out well to deny Walker. Calum Duffy then twice headed clear under pressure and Andy got in a vital block, following a corner. Hanwell seemed to have survived the onslaught and Harry Rush almost put Jack Hutchinson through but he was pushed too wide. A minute later Town were forced to replace injured lone striker Ogo Obi with Brendan Matthews. With just a quarter of an hour to go the visitors went in front, in a most unfortunate way as far as Town were concerned. Left back Edon Pruti played the ball into inside and went on an overlap. The return pass did not reach him and substitute Joel Rollinson raced clear down the vacant flank. His low ball inside saw Whelpdale hit the post, but Hanwell’s relief was short-lived as Walker followed up to put Eastbourne in front.

The Hanwell management quickly responded by replacing two midfielders with two front men. Town now looked livelier up front and a neat passing move involving substitute Adam Laaref and Dan led to the latter’s shot being blocked. The ball fell to the other late substitute Tomasz Siemienczuk, but he completely miscued. The home fans were on the edge of their seats again when Dan chipped the ball into the danger area only for Worgan to pip Tomasz to the ball. This was more like it! However, going forward in numbers always leaves gaps at the back which A.F.C. Wimbledon ‘loanee’ Currie exploited with a great run and cross. The ball was met by Charley Kendall, who thundered it against the bar. Kendall’s disappointment did not last long however. Two minutes into added-on time, with all the Town players upfield, seeking to equalize from a corner, the Eastbourne substitute raced down the pitch to make the game secure.

It was a disappointing result but the visitors just about deserved their victory, perhaps by just the one goal! We wish them and their committee all the best in the next round. Town’s consolations were a small amount of F.A. ‘prize money’ and, for some, the avoidance of a Tuesday evening trip to the South coast involving the currently even more notorious than usual M25.