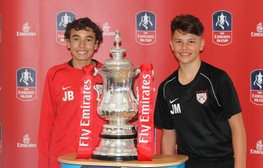 The feelings of disappointment, dejection and inequity hung long in the air after this ‘hard to swallow’ defeat. Having played most of the match with ten men Hanwell deserved at least a draw and could have won a victory against the odds, but it was not to be, and it had all started so well! Less than two minutes into the game Town had scored, when a short corner from Harry Rush to Joel Jacobs had led to a goal. Joel’s away-swinging centre was met by the head of David Taylor and fumbled into the goal, off the underside of the crossbar, by ‘keeper Gerrar Denzil. Two minutes later Kieron Cathline strode forward and forced a diving save from the visiting ‘keeper. Harry Rush’s driving run then set up Tayshan Hayden-Smith but his shot was blocked. Almost immediately Giani Crichlow burst down the left and clipped the ball into the danger zone, but it was headed clear.
However, in the eighth minute the mood at ‘The Powerday’ changed dramatically. Andy O’Brien slipped as he went to clear and, as Andrew Demby raced clear on the edge of the area Harry Tucker pulled him back. The Hanwell central defender, replacing the suspended Dwayne Duncan, was adjudged to have been the last man, and shown a red card. Three minutes later the Town management replaced Harvey Killeen with a defender, right back Callum Woodcock, with Kieron moving into central defence. The ensuing minutes saw the visitors with a lot of possession, but it was not until the twenty-five minute mark that Hugo Sobte was called into action, first saving from Mahrez Bettache, then, spectacularly getting a hand to a threatening cross. To their credit ten-man Town kept on trying to break forward and won a free kick in the thirty-fifth minute. Harry Rush’s ball into the box was met by a diving Andy O’Brien’s head and, against the odds, Hanwell were two up. Five minutes later it could have been three, but another Harry Rush free kick across the area was missed by everyone, when it only needed a touch to go in.
With half-time approaching, and being longed for by the home supporters, the visitors struck out of the blue. Che Krabbendam picked up the ball wide, drifted inside and suddenly let rip from fully thirty yards. The ball whistled into the far, top corner and the Swans were just a single goal down. Hanwell responded cleverly with Gareth Chendlik going for goal directly from the kick-off, putting the ball inches over the bar with Denzil crashing backwards into the netting.
The second half witnessed a lot of possession for the visitors but the Hanwell rear-guard kept them at bay and Hugo was brought into the game by back passes rather than any shots on target. Hanwell were reduced to attempting breakaways, with half-time substitute Jack Waldren, making a welcome return from injury, looking lively down the left flank. When Dara Dada-Anite was whistled up for a second foul that left a Hanwell player writhing on the ground, a second yellow card seemed certain, but to Town’s surprise and dismay he was only spoken to by the referee. The visitors then found the back of the net in controversial circumstances. They were awarded a penalty in the seventy-fifth minute, after Krabbendam had dramatically gone down in the area. After lengthy Hanwell protests the front man converted and Staines were level.
In the eightieth minute Rob Laney replaced the battling Gareth Chendlik, who left the field to warm applause in appreciation of his lone efforts up front. Staines were now going all out for a winner and Hugo was called upon to grab a cross under severe pressure. Almost immediately a cross found Aaron Ibe in the six yard box but he volleyed wide of a gaping goal.
With the Hanwell faithful re-planning their Tuesday evening, Hanwell attacked down the right and Rob was fouled in the area, and the referee pointed to the spot. When Denzil finally stopped running up and down his line he threw himself to his right to save Rob’s penalty. That felt bad enough, but things got worse for Town when, in added-on time, Krabbendam dribbled into the area and completed his hat-trick. It was a bitter pill to swallow. Town now miss out on the excitement, rewards and sometimes glamour of the Second Qualifying Round of the F.A. Cup 2019-20.
TEAM: 1.Hugo Sobte 2.Kieron Cathline 3.Joel Jacobs 4.David Taylor © 5.Harry Tucker 6.Andy O’Brien 7.Tayshan Hayden-Smith 8.Harry Rush 9.Gareth Chendlik (14.Rob Laney 80) 10.Harvey Killeen (16.Callum Woodcock 11) 11.Giani Crichlow (19.Jack Waldren 46). Unused substitutes: 12.Jeremiah Maja 15.Tejinder Singh 18.Liam Tack
Share via
FacebookTwitter
https://www.pitchero.com/clubs
Recent news