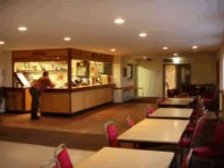 The HRFC Bar is a large flexible area ideal for exhibitions, functions, formal and informal celebrations, disco's and live bands; able to facilitate up to 100 people

The HRFC Bar is open to the public on match days from three hours before kick off and well into the night. It also has great views of the main match pitch so supports are encouraged in all weather

All around the HRFC Bar there are action shots from all sections of the club as well new captains and presidents boards, and behind the bar you can find all the trophies won by the club

After his untimely death in 2004 Alan Padburys friends and colleagues at the Rugby Club were determined to install a permanent memory to their close friend. A major change to the layout of the Clubhouse created a space from which Paddy could watch matches during the final months of his life

This is now known as Paddy's Place and includes photographs and memorabilia of his playing days. However, it is not just a space for reflection it is an area where friends can gather and remember Paddy in the way that he would have wanted it - some fun and laughter over a few beers

The John Bromley Lounge is named after founding chairman of HRFC, and is a suite suitable for board meetings and business functions as well as a functional room for relaxing after match

The walls are covered in the history of HRFC, spanning from the first founding teams to the current day squad, covering all the age ranges from mini and junior to seniors