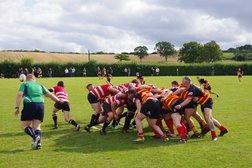 Final run into the end of the season.

Following on from the emphatic win against Chaddesley Corbett, we were all looking forward to the next league match; away to top of the table – Claverdon. Before that, a trip over to play Shipston 2s in a friendly. Unfortunately not only did we lose 36-12 but the injury list grew yet again.
Early the following week it soon became apparent that player availability for Saturday was NOT looking good. The Committee worked hard throughout the week but a number of players were out through injuries picked up against both Chaddesley Corbett and Shipston; testing positive with Covid, shortage of a front row and individual’s personal commitments forced us to pull out of the fixture due to insufficient numbers. Did some players not fancy pitching up against top of the table opposition? – we didn’t hear any evidence of this. Holroyd contacted Claverdon’s Chairman Friday morning to apologise on behalf of the Club.

On the morning of Saturday 2 April, Coventrians belatedly pulled out of the fixture against Harbury as they were unable to field a side. Not wanting to waste the occasion, it was decided to put Saints v Bristol on the big screen; beer £2 a pint followed by the after match meal. Not quite the same as a good run out but the end result was much the same!

Unfulfilled fixtures have been happening throughout all the leagues and are of concern to the RFU.

Seventeen players made the team sheet for the journey over to Upton upon Severn on 9 April. Whilst the final score (49-5) certainly doesn’t look good, the lads did put in a full shift. It didn’t help that Team Manager Ben Linnett was not on hand to offer his insight into the game. The Club took advantage of this away fixture and booked in the Rawlinson Bracket cycling event endorsed by British Cycling. This is the third time that the Club has hosted the event and they raised funds for research into, and awareness of, Sudden Arrhythmic Death Syndrome as well as humanitarian support in Ukraine.

A full squad travelled over to Kings Norton for the last league game of the season. This was an evenly matched contest which Harbury finally closed out the game with a try bonus point win 17-24.

Harbury finished the season in sixth place in the Midlands 4 West (south) league; notching up 9 wins, 7 try bonus points and 3 losing bonus points – a result to build on for next season!

After three years at the Club, Director of Coaching – Hendry Rheeders is moving on to fields anew. Hendry re-energised the players, attracted some new signings and leaves the Club in a much stronger position. We wish him all the best.

Josh Biggs will take over the role as Team Coach ably supported by Team manager Ben Linnett. Fitness sessions are continuing two nights a week before Pre-Season training gets underway in July. Season 2022 -23 presents a very exciting prospect and time for the Club.