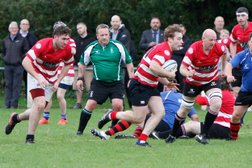 No wins in the league.

SHOTTERY 5 HARBURY 40
Harbury started the day intending to travel to Chaddesley Corbett in the league, but the planned fixture was thwarted by the weather. Snow was adjudged to have sufficiently covered the 1st team pitch meaning the match could not be played. Shottery found themselves in a similar boat having already organised 2 fixtures only for both to fall through. 3rd time proved to be the charm as newly available Harbury agreed to travel to Stratford. With a bitter wind blowing at Harbury’s back, the game started with 14-a-side as Shottery sportingly dropped a player whilst the visitors pulled themselves together. Whilst Harbury dominated field position and possession, Shottery found a purple patch of their own and made the most of some broken defensive lines, to go over for an unconverted try.
HARBURY 17 CLAVERDON 49
A pre-match lunch was organised by Stevie Alford for a number of “old” Harbury players that either no longer can commit to playing or could be enticed into playing again. Claverdon travelled to local rivals Harbury knowing a win would take them top of Midlands 4 West South and stretch their unbeaten run to 8 games. It is always a difficult away trip but a team high of confidence expected a performance. Harbury were not firing on all cylinders and turned round 7-15 down at half time. With the wind behind them, Claverdon pinned the home side in their half and despite some resolute defence the match started to slip away from Harbury. Going into the final quarter of the game Harbury were behind 12-25 and Claverdon continued piling on the pressure to run out comfortable winners.
COVENTRIANS 25 HARBURY 9
It always seems to be wet and windy when Harbury travel to Coventrians and this Saturday was no exception. Three penalties in the first 15 minutes Harbury established a nine point lead. Thereafter, Harbury dominated possession, attacking Coventrians line at every opportunity but failed to convert the pressure into points. Coventrians, gradually dragged themselves into the match and whenever they got into the opposition half managed to make it count, running out worthy winners against a Harbury side that were lacking confidence.
On 18 December Harbury were due to host Upton on Severn but the game was postponed due to concerns around Covid.
What a fantastic first half of the season for the Harbury M and Js! Started off with some intense training sessions to get back into the swing of things, followed by a series of competitive fixtures including some cup success. A number of junior players have been selected for either the Wasps or Worcester Developing Player Programme. It was all finished off with a Christmas party including some egg rugby (yes, a lot of egg on the head!), rugby gauntlet and a classic, tug of war.
Really looking forward to getting back to it in the new year on the 9th January and as always, welcoming new players. Get in touch with Phil (sheepy226@virginmedia.com) or Chris (chris.woodhams@argentaconsult.com) if there are any queries.
Share via
FacebookTwitter
https://www.pitchero.com/clubs
Recent news