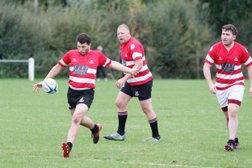 HARBURY 17 OLD WHEATLEYANS 19
On a dry and mild Saturday afternoon at Waterloo Fields, Harbury hosted 2nd in the table Old Wheats. Harbury started the match on top whilst Wheats looked to be outgunned as they were pinned back in their 22. Despite the sustained period of pressure, the hosts did not reap their deserved rewards as the visitors defence held out and continued to clear their lines.
After 20 minutes though, winger Toby Whelan linked well with full back Joe Hunt to leave himself 1 on 1 with his opposite man. A deft touch saw him grubber the ball in behind the defence, which he reclaimed to touch down in the corner.
Wheats returned fire with a try.
Harbury continued to press, with reward coming as Wing (and fixture secretary!) George Bostock scored a brilliant solo try. Bostock took a flat ball, rounded his man, kicked ahead & regathered to dive over in the corner to lead 10-5 at the break.
Wheats then shifted into gear. Harbury’s Scrum began to falter, and Wheats took advantage of turnovers to score 2 converted tries. Harbury continued on though and were rewarded when centre Steve Alford cut through the defence 60 yards out and rounded the full back to score under the posts.

OLD YARDLEIANS 20 HARBURY 18
An injury struck team travelled up the M40 to face 4th place Old Yards with several players answering the call including notable appearances from forward James Daniels and Hooker Adrian Exton.
Unforced errors, knock-ons and penalties coughed up by the visitors gave the opposition valuable possession that they converted into points. However when Harbury did string together some flowing passes along the backs together they scored with ease.
Joe Hunt was brought in at stand-off increasing Harbury’s tempo thereby allowing centres Chris Woodham’s and Steve Alford to open up holes in OldYard’s backline. Extra space created out wide allowed Ricky Alford to score a try in the corner. Momentum swung Harbury’s way in the final quarter; a try was ruled out for a forward pass and then another opportunity went begging as the ball was dropped just short of the line. A low cross field kick was picked up by the winger to score in the corner on the cusp of full-time. The conversion was missed, leaving the visitors with a losing bonus point as a reward for their unquestionable effort.

TRINITY GUILD 17 HARBURY 33
Harbury’s planned league fixture at Chaddesley Corbett was cancelled due to the home side not being able to field a front row, giving Harbury 5 valuable league points.
Harbury took up Trinity Guild’s offer to host a friendly game. Harbury travelled over with 18 players only to find that the Guild only had 8 players. The teams were mixed to create a match with 13 a side.Whilst Harbury ended up winning the match, they lost two players with a clash of heads, one player requiring 7 stiches above his eye.