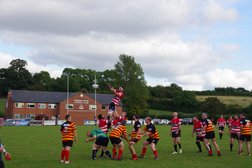 A fully deserved victory for Harbury in their opening league match. Although they were convincing winners this was not reflected in the first half. Harbury were dominant in the set piece but rather than keeping patient they coughed up needless penalties through over excitement at their scrum dominance.

Several try scoring opportunities were missed as the referee strictly applied the new laws. It took a fine individual try to break the deadlock and despite crossing the line on three other occasions the score at half time was just 5-0 to the hosts.

Coach Hendry Rheeders outlined the need for patience at half time. This was taken on board by Harbury who added 4 converted tries for the win. KNs attack from deep was stymied due to some outstanding defence by Harbury with the back row in particular and the backline especially alert in the tackle.

A handy start for Harbury, who undoubtedly will face some difficult opponents in what looks like being a highly competitive league.