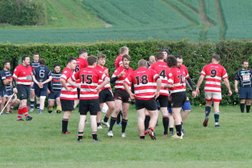 Rugby matches are back without scrums or mauls!

So much for the merry month of May NOT - with all the rainfall we had during the first few weeks of the month! However, the rain did help the grass to recover on the 2nd and 3rd team pitches after they were well scarified at the end of April followed by a fertiliser spread over all the pitches and training area.
The rains were so heavy to cause the Coventry Blues CC first home match against Inkberrow to be called off on Saturday the 8th .
The first rugby “match” of 2021 took place at home against Southam RFC on Friday night 14th of May. This was a return fixture from last December’s game. Still in lockdown3, Covid restrictions required that the game be played without both scrums and mauls being allowed. The match was played in four 20 minute sessions. In the weeks leading up to this match around 40 lads regularly turned up on Tuesday night’s training with Hendry and Thursday night sessions with Josh Biggs. All their hard work became self-evident during the match with a well organised and disciplined display by the hosts. Whilst Southam did come away with a “W” it was an encouraging Harbury performance – especially when you consider that Southam play in a league two leagues above Harbury.

Fitness sessions on Tuesday and Wednesday nights are continuing through June and pre-season training will start up again at the beginning of July.

Due to the lack of activity throughout the first quarter of the year, the RFU extended the season to the end of May thereby allowing the Minis and Juniors to hold matches against Leamington, Shipston and Stratford through May. We look forward to welcoming the children back in September and hope that they will be able to start playing again restriction free.

Ladies Touch continues with training every Thursday night from 7;00 to 8;30pm. Twelve players and three coaches travelled away to Bredon to attend their first tournament of the season on Sunday 30th May.

Taekwondo classes started back up after lockdown3 on Monday and Wednesday nights and will continue throughout June. Under the instruction of Miss Cassandra Oury, who is a 4th degree black belt, World, European and British champion, classes are run for both children (from pre-school) to adults. If you are interested in joining a class, contact Cassie on 07850 327507.
Since the 10th of May, personal fitness trainer Cory Green holds a fitness camp for three quarters of an hour from 6:00pm on Monday nights. Interested – call Cory on 07786 320813.

A major service of the two shower blocks was carried out. The push button taps and temperature control units were replaced and the spray heads cleaned and sanitised.

The Club received its first delivery of the year from its wholesaler on the 25th of May in preparation for a match against Old Laurentians the following Friday. Now outside of lockdown3, the bar inside was opened to serve tables of six, all socially distanced.