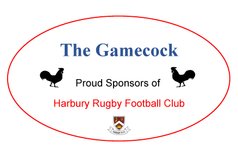 The New Season Kicks Off

Following the aftermath of the illegal encampment, the Committee discussed the various options available needed to improve security at the Club’s entrance. George and Ian Mann immediately placed large concrete free standing wall panels as a temporary measure to minimise vehicular access. The Committee subsequently agreed that a number of “pop up security bollards” be installed directly behind the existing gates. This work will be undertaken during October.
Rugby training has continued on Tuesday and Thursday nights. Ladies Touch also train every Thursday from 7:00 to 8:30 pm. Linno (Ben Linnet) and Neil Stevens have been running a bar after training with attendances growing each week and “last orders” getting called progressively later each week. Beer supplies have certainly increased dramatically throughout September.
A pre-season home match was played on September 11 against Banbury with Harbury running out winners 38-17. Several new players ran out for their first competitive match in a Harbury shirt. Whilst Hendry had got them turning in an impressive performance it was not without collecting a few casualties due to the hard ground. A couple of beers afterwards in the Clubroom had an anesthetising effect on some of the bumps and bruises. The lads then moved on up to the “Gamecock” in the village where £550 was raised towards the recent cost of bailiffs.
The preliminary round of the Junior Vase was held the following week with Harbury hosting Biggleswade. Due to injuries and unavailability, a very different side took to the field and soon found themselves on the back foot with the visitor’s winger running in a couple of tries. The second half continued in much the same vein and with ten minutes to go, Harbury ran out of steam and Biggleswade ran in three converted tries to win 3-38.
The first League match of the season was held against Kings Norton on the 25th. Despite not being able to field a consistent side, Harbury dominated most phases of play claiming a try bonus point win 29-0.
The Cricket season closed at the end of August with home sides Coventry Blues finishing top of Division 5 and Kenilworth 3rds topping Division 6.
The shipping container was insulated and boarded out during September and work continues connecting up the electricity supply, fitting sockets and lights.
The Mini and Juniors have had a great first few weeks of the season that has seen Coventry RFC players taking over training and our U14s doing an awesome job in a Worcester Warriors Academy Development Day, so lots going on! We are now moving into our fixtures with the first few weeks seeing us face Alcester, Leamington, Shipston and Berkswell & Balsall, everyone is raring to go.

Our colts team, The Hawks, are working on forming a Barbarians team with some of the other local clubs having had two joint training sessions the last two weeks, hopefully building up to some future fixtures.

Any players keen to see what it is all about at Harbury RFC are welcome to come along and try it out, just contact Phil at sheepy226@virginmedia.com