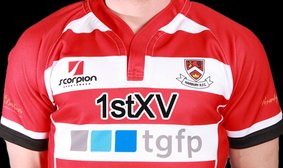 All aboard the fun bus!

Harbury returned from their Worcestershire travels with a vital three points and a 24 apiece draw with Pershore to aid them in their quest up the table.

A glorious winter’s day was greeted for those that travelled west to Pershore to watch the ever improving Harbury battle to a deserved draw. In a result that could have gone either way both teams will be happy with a share of the points and four tries a piece to secure three points each.

It was Pershore who drew first blood and scored early on following a lapse in concentration from the Harbury backline. A hopeful Pershore kick into the corner was not dealt with and the bouncing ball fell kindly to the onrushing winger who was first to react although outnumbered by Harbury defence.

It was looking like it could be a long day for Harbury who were also struggling in the scrum early on but Pershore failed to take advantage. Eventually the pressure valve was released with a succession of penalties meaning Harbury were able to move up the right flank by taking advantage of a superior line out and accurate throwing from Pickin in a challenging wind. With Pershore defending on the 5 metre line and Harbury working the phases the ball was shipped out wide but with gaps opening up the ball was dropped and the chance gone to level the score.

With play returning to an arm wrestle in the middle of the pitch it was an individual piece of skill which brought about the levelling score with the newly crowned king of fun himself “fun Will” picking the ball up and beating several defenders before offloading to the supporting full back Ed who ran in unopposed.

Pershore quickly responded to this set back by pinning Harbury in their own half. With Harbury defence standing firm a clever kick through was fielded by fly half Mark Anderson who won an important foot race but was only able to put the ball dead resulting in a 5 metre scrum where Pershore secured a pushover try. Immediately from the restart Harbury were under pressure again and found themselves in the corner 5 metres out from their try line. Strong defence from the Harbury pack saw them take control of the ball but quick defence left Harbury unable to clear their lines resulting in another 5 metre scrum and Pershore celebrating what they thought would be a 3rd try.
From this moment the Harbury scrum clicked with front row Pickin, Heydon and Sanford refusing to buckle. For several minutes Harbury defended and put their bodies on the line with numerous tackles. Another scrum came 5 metres out which Harbury won against the head with the ball being cleared and the boys in red and white celebrating like a try had been scored.

With half time moments away it looked like Harbury had kept the deficit to a minimum but there was time for a moment of wizardry when Milburn picked up the loose ball which had escaped a scrum 60 metres out. No one believed what they saw as the back row handed off the scrum half, rounded the flanker and left the winger twisted inside out with a wicked side step which left Milburn with a clear run to the line.

The second half began with Harbury in the ascendancy; dominating the lineout, running hard and working the phases but they were unable to make the pressure pay. From a strong position Harbury lapsed and a succession of mistakes led to an undeserved Pershore score. A kick to touch was missed and when the kick was returned no one was home to field it with the ball bouncing towards the Harbury line with Pershore scoring the try in the aftermath.

With the visitors trailing again they upped the pressure. Harbury moved the ball from left to right with direct running from forwards Spade and Doddsy and captain Alford in particular. Eventually the ball was moved to the wing as Anderson broke the line and found Evans who finished well in the corner only for the referee to call it back for a forward pass which was millimetres at most.

Pershore upped the ante with a prolonged piece of pressure but could not find a way through the Harbury defence and the ball was eventually stolen in the 22 by Milburn who again showed power and pace to run clear up to half way where he found Anderson who weaved in and out of the Pershore defence before outpacing the full back to score in the corner and level up at 17 points each.

Harbury continued their strong second half showing by keeping possession from the restart and working the ball up into the opposition half. Pershore were starting to fall off tackles and when Harbury worked a move off a scrum which started on the left flank the ball was moved across the pitch with accurate passing and smooth running where it eventually ended up on the right flank with Ed scoring his second of the day giving Harbury the lead for the first time with Anderson knocking over a crucial kick from the touchline to make it 24 - 17.
As the game entered its final 10 minutes Pershore found another gear. Harbury defended well with tackles being made though at one point the line was broken only for Evans to cover when the try line was beckoning. From this the ball was recycled and Pershore worked the phases well to eventually score and convert to level up at 24 each which is how the game would finish.

Both teams will feel they could have won the game though both will take the draw knowing it could have gone either way. Harbury boarded the fun bus back to Waterloo Fields with 3 points and a good performance to take forward for the crucial match against Redditch on February 16th.