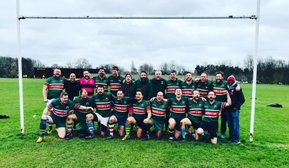 At the coin toss, captain Pat Hawkes was asked by the referee to call heads or tails. In a bold move, Hawkesy chose not to say anything before the coin hit the floor. On the second attempt Pat just said "we'll take this end". It's still unclear if Hawkesy doesn't know how to do a coin toss, or if this was a master stroke in mind games. Anyway, he got in the Old Street skipper's head and Hawkes chose for the Rhinos to play into the substantial wind in the first half.

The Rhinos started strongly, with the forwards dominating the rucks and looking dangerous in the loose. It became clear early on the ref was not going to let any hint of an infringement go, with the Rhinos forwards getting pinged time and time again for handling the ball on the floor and high tackles which barely looked nipple height.

Regardless, Haringey got the first points on the board, when some good retention and penetrating runs from the forwards led to scrum half Andy Swainson making a dash from a ruck, full back Tom Armer ran a hard line and burst through from 15 metres out to score under the posts. Converted.

More penalties against the Rhinos, and then chat to the ref from the usual suspects led to the Rhinos getting marched back 10 metres twice, and allowed Old Streetonians to kick two penalties. Separating the Old Street penalties was another Rhinos try. Matt Pert was the beneficiary of a loose ball which popped out of ruck. He caught the ballooning ball and drove his tackler over the line.

After a tough first half of playing into a strong wind, Coach Fletch told his squad to play with patience in the second half, and the score will take care of itself. Now with the wind, the Rhinos cut loose, seizing chance after chance and putting Old Street to the sword.

First up was a try from rampaging number 8 Phill Fernie. A turnover 5 yards out, Fernie won the ball and went over the winger to score.

In what was surely play of the day, captain Hawkes gathered the high kick off, ran through a couple of would be tacklers, and sprinted 40 metres down field. After subbing himself on, scrum half Fletch was in hot pursuit and fed the ball to the supporting centre Steve Brassey, who ran in and dotted down. A great try.

The next score came from a break down the left wing from Armer, who hit a long kick inside near the posts. Rapid flanker Chesh put huge pressure on the covering Old Street player, won the ball from him and scored under the sticks.

Next up was a great interception from Dan Fosbery who read a telegraphed backs move and sprinted away to score under the posts.

The last try for the Rhinos was a second from Chesh from a driving maul, before Old Streetonians managed a score of their own the end.

MOM
There were a series of great performances. The whole front row were strong, Handles and Matt Pert worked tirelessly in the second row, Fernie and two-try Jakens dominated, Swanny was class as usual, Tom Pert controlled the game well at 10. But MOM was captain Pat Hawkes who led by example and was absolutely everywhere all game

DOD
It was a close call and could easily have been Tom Pert for back chatting the ref and also nominating to kick a penalty when we were 30 points up, but DOD was Ali Wilson. He's been waiting 20 years to play number 8 for the Rhinos, and finally got his chance with 5 minutes to go of the game. 30 seconds later he's walking off the field and into the sin bin. Back to prop in the final.