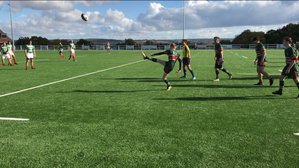 Positives to build on

This match was going to be a big test for the Rhinos as they were up against a team playing a couple of divisions above. However going into the match, confidence was high.

From the kick off, Haringey pressured the Cheshunt attack however defensive lapses saw Cheshunt break through and score an unconverted try. Both teams showed great strength, skill and persistence and following multiple phases of play, Cheshunt crossed the line two more times to extend their lead. Haringey didn’t let their heads drop and following long periods of sustained pressure, brilliant work at the scrum and rucks, with the last play of the half, Haringey centre Jahn broke through the Cheshunt defence to score a well deserved try. Conversion missed.

A strong start to the second half saw Haringey put good phases together, and captain Andreas was able to ghost through a gap and power over the line to add to Haringey’s tally. George was successful with the conversion.

The game turned into a fierce arm wrestle but with Cheshunt able to bring on more fresh legs and reinforcements, the hosts scored 3 more try’s to extend their lead and eventually close out the game. Final score Cheshunt 36 - Haringey 12.

Despite the loss, Haringey showed great discipline, skill and heart. The team took away valuable lessons and have things to work on as this group of players looks to keep improving.