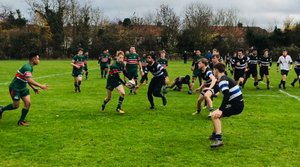 Down to the Wire Again

Over the last few seasons fixtures against Chingford have always come down to the wire and this one was no different.

Rhinos kicked off and immediately applied pressure to Chingford forcing a scrum just outside the Chingford 22. Multiple phases past and although the Rhinos were getting over the gain line Chingford managed to hold up a mall winning them a scrum on their 5 metre line. However brilliant work from the Rhinos forwards resulted in Chingford losing their own scrum and with some quick hands winger Toshane scored in the corner giving Rhinos the lead. The conversion was unsuccessful.

Chingford were eager to respond and after some back and forth play and multiple penalties won themselves a scrum at the Rhinos 5 metre line. From this they took an 8 ball and after successive crashes managed to break through the Rhinos defence and score. The conversion under the posts was successful momentarily giving them the lead.

The game continued, both teams playing hard and fast. A break away run from Stephen relieved the pressure and moved play deep into Chingford’s half. Following this a penalty which was taken quickly created space for Toshane to score a second try down the blind side. Conversion missed.

Straight from the restart Toshane collected the ball and made an incredible run through the entire Chingford defence to score his third try of the match! The conversion was successful. Still Chingford would not go away but the Rhinos defence held for the rest of the half.

The second half kicked off and Chingford kept up the pressure with some fresh legs. Still a great line from Jahn relieved the pressure momentarily but the Rhinos couldn’t capitalise putting Chingford back on the front foot. Tiredness became a huge factor for the Rhinos which caused tackles to go high and offsides became more frequent. Finally after being camped in the Rhinos half for over 20 minutes Chingford managed to score an unconverted try reducing the lead to 5 points.

The match resumed and Rhinos looked to hold or possibly extend their lead. But Chingford had all of the momentum. Ultimately the Chingford rolling subs made all of the difference and with the Rhinos conceding far too many penalties Chingford managed to score another try under the posts. This was converted giving them the lead with 5 minutes left to play. Still the Rhinos didn’t let their heads drop and Pushed for the win but it was too little too late the game was over.

Although the result was disappointing, it was still a very competitive match with positives to build on.