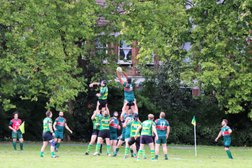 Rhinos returned to New River on Saturday hoping to reproduce the winning performance of their season opener, but were unable to find their rhythm against a well-organised Watford team and suffered a heavy 33-0 defeat.

Rhinos got off to the worst possible start, quickly conceding as Watford's strike runners carved through the Haringey defence. Haringey struggled to settle and weren't able to make the most of their limited possession. A further two scores followed, with Rhinos 21-0 down as the half ended.

The second half brought some signs of improvement from the Rhinos. Defensive line speed and organisation improved but one costly lapse saw Watford stroll over the line unchallenged off an attacking line-out. Elsewhere though the pack started to put Watford under pressure, especially at the scrum, and phases started to build. Aiden Morrison made a man-of-the-match contribution off the bench, adding some much-needed fire to the defence. And the backs showed moments of attacking threat, with outside centre Dwight Caulker and 15 fullback Alex Hull combining effectively in one sweeping move.

But with persistent rain making conditions difficult throughout the match, the error count rose steadily, and Haringey found themselves pinned in their own half for much of the later moments of the game. The pressure ultimately told, with Watford scoring again to seal the victory.

Captain Owen McKenna said:
"We fell short today in too many areas of the game and Watford took advantage of that. It's a disappointing result and we expect more from ourselves as a team. We've got plenty to work on at training so we'll be looking to put things right for the next game."