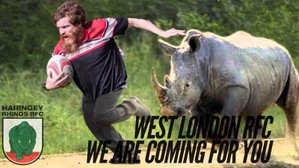 2nd win of the day for the men at Haringey

With the Rhino veterans in town and rays of brilliant sunshine warming the autumnal Haringey ground spirits were high entering the rhino’s Saturday afternoon clash with West London.

The rhinos opened the clash with devastating up front carries from the forwards wreaking havoc in the West London defence. Already down to fourteen men, West London were drawn in to the tackle area creating massive overlaps out wide. Slick passing in the backline allowed juggernaut winger Leighton Ball to use his pace and strength to touch down in the corner for the first of a trio of Lomu esque tries, converted by Aiden Keenan Morrison. The above proved to be a recurring theme throughout the contest, with Haringey in a league of their own throughout the fixture.

Fullback Rory Ball Reeder punched through two would be tacklers to book in his maiden score for the men in green, while fly half Ben Hardie added two more scored from strong midfield breaks to his total. First year hooker Andy Muthukumar put the contest to bed with a sneaky pick and go from 30m out befuddling the defensive line to allow him his first 5 points.

All in all a strong decisive performance from the men in green, however hats off to West London for their continued effort and relentless in defeat.