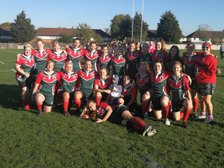 The ladies also picked up a new mascot!

Haringey Rhinos made it four wins from four in the league this weekend with a victory against Tabard.

With the opposition struggling for numbers the game started as 12s, but almost immediately Tabard picked up an injury. With no replacements, vice captain Andrea Coley stepped in to play for the opposition to keep the game going. The Rhinos quickly found their rhythm and just 8 minutes in Molly McNamara broke through the Tabard defence to score the first points of the game.

Ten minutes later superb work by Sam Shirley in the scrum steeling the ball allowing scrum half Ali Archer to sprint up the half the pitch, handing the ball off to Fran Gamble to score the Rhinos second try of the game, which she then converted.

Unfortunately Tabard picked up another injury so more Rhinos players stepped in and put on a Tabard shirt.

Full back Lou Bonnet scored Rhinos third try when a driving run down the middle of the pitch was too strong for the Tabard defence. She cooley converted it (the way our frenchie does) to increase the score. In the 30th minute Tabard were awarded a scrum on the 5m line which allowed them to pick up their first points of the game. Just before half time Aimee found a great line through the Tabard defence to score Rhinos 4th try which Fran converted.
At half time, Tabard’s list of injuries was just too much for them to continue and they had to call time on the game.

In the true spirit of the game both Tabard and the Rhinos enjoyed the hospitality in the clubhouse after the game with a beer and some other types of games!

Biggest Hit went to Hannah Bennett, who is normally a back but stepped up and played in second row
Players Player went to newbie Ali Archer who put in a shift as number 9 on her first match.