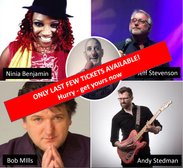 A small number of tickets left for this great line-up, hurry and get yours now!

Our fabulous confirmed line up:
NINIA BENJAMIN
Ninia is one of the UK’s hottest female comedians, with a wealth of television, stage and live stand-up experience. She makes frequent appearances at the Edinburgh Festival, and is often seen on our TV screens. Recently starred in ITV's Our Shirley Valentine

ANDY STEDMAN
Andy is a professional comedian, gigging on the circuit as an act and MC for many of the biggest promoters and clubs. His comedy songs, jokes and likability with audiences have made him an in-demand act.
"As well as being one of the nicest and considerate performers on the circuit, Andy Stedman is a fine comedian. Whether he's acting as compere or headliner he always delivers funny routines without resorting to offensive language or material which in this day and age is a refreshing quality to possess. First class in my book." - BOBBY DAVRO (comedy and TV legend)

BOB MILLS - Headline
Bob Mills burst on to the London Comedy scene in 1985, turning the faltering “Alternative” establishment on it’s head with his unique, challenging brand of laddish irreverent stand-up.
Over the next ten years BOB MILLS established himself as one of the most successful live acts in the country, as well as putting together a string of acclaimed TV credits. Bob has a list of TV credits to his name but will be familiar as the host from ITV’s long running daytime show ‘Win Lose or Draw. His off the wall programme ‘In Bed with Medinner’ was also a huge hit with audiences alike. On Radio Bob could be heard regularly on his own show on Talk Sport.

JEFF STEVENSON - MC
Jeff is a vastly experienced comedian who has been in show business since the age of 14. Starting out as a child actor, Jeff was booked for his first paid gig at the tender age of 15. Jeff has been a top-rated comedian for over three decades and hugely enjoys performing stand-up comedy to audiences around the world.

With these stars this event will be a sell-out!

Order your tickets now from lindadunleavy@live.co.uk.
Tickets are £12:50 each and must be paid for in advance