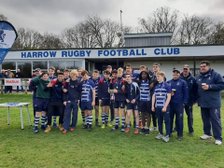 There was some brilliant rugby played at the Harrow Youth 10s Festival on Sunday. The Harrow U16s were the only unbeaten team!

The teams played 10-a-side rugby against each other and we were treated to some excellent fast play as the lads took to the task of playing this brand of rugby.
Unfortunately the sun had been replaced by a biting wind but that did nothing to dampen the competitive spirit of the day. We hosted over 160 young players plus coaches and supporters, and our friends from Beddau travelled the 170 miles along the M4 to join us again and it was great to see them!

Thanks to brilliant organisation and a superb team of volunteers, the day went very well and as a celebration of youth rugby it was excellent!
Playing in a round-robin format the most successful team on the day was unbeaten and managed a tough win against the excellent Welsh team and it was our own Harrow U16s! Well done to them and to Beddau and Ruislip who went home with trophies for highest points accumulated.
It was a tight thing for most points scored between the Harrow and Beddau lads which the Welsh visitors took by only 10 points across 6 matches.

Thank you to everyone who took part and helped to make it such a great day at the club! In particular, thanks to Margaret Glynn for organising the day, Reece Riley, the England Rugby CRC who ref'd several games and handed out the awards. Also a huge thanks to our volunteer refs without whom the day would not have been possible.

A great all-round effort and successful day for Harrow RFC!