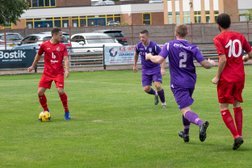 Harrow Borough are delighted to announce that Anthony O’Connor has agreed a one year contract with the club.

Manager Steve Baker said “Ant has had a very good pre season and a great start to the campaign. Although he was already with us on non contract forms I felt along with the majority of the squad it was key that we got him on contract for this season. He is a player that has shown huge improvement in his time at the club and I believe this will be a really big season for him’

O'Connor joined Boro in the summer of 2017, scoring seven goals in this first season & twenty three last season. He scored his first league goal of this season on Tuesday at Hayes & Yeading United