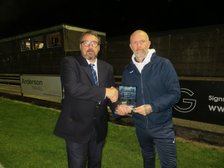 PST Sport. Club of the Month Awards for September

In each division of the Pitching In Southern Football League, the club with the best average points per game is declared the winner.

Clubs must have played a minimum of three games during the month in either a league, League Cup, FA Cup or FA Trophy match to be considered.

Should more than one club have the same best average points per game, then the winner shall be declared as the club with the best goal difference (in league matches) and if that is equal the club scoring the most goals.

Each winner receives an engraved glass memento along with a voucher for use with the company.

The Premier Division South winners for September are Harrow Borough.

Steve Baker`s men began the month with a 4-2 win over Ramsgate in the FA Cup and then enjoyed an upset by winning 2-0 at Park View Road against Vanarama National League South side Welling United in the next round.

Boro enjoyed a month when all six matches were won, including three in the league and one in the League Cup, beating Weston-super-Mare, Farnborough, Dorchester Town and Hendon.