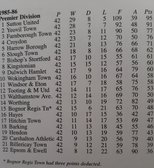 How do you replace a legend? Filling the gap left by the departure of the club’s most successful-ever manager Mike Tomkys was a tough ask. During the latter period of his reign, Harrow’s reserve side had enjoyed much success too, and the Board took the decision to offer the job to the boss of that side, Keith Chamberlain. It was a new era on the field too, as championship-winners Andy Pape, Ray Metz, Derek Doyle, Harry Manoe, Clevere Forde and Derek Harris all departed in the summer.

Chamberlain’s Borough began their campaign with a 0-1 reverse at Bishop’s Stortford, but two home wins followed to settle things and a more-than-decent league campaign followed. Alas, four defeats in the closing four games meant a fifth-place finish rather than the third which was very much on in mid-April. Champions Sutton United, who this time round took the decision to move up to the Gola League, did the double over Harrow, but Borough took four points from runners-up Yeovil Town with a 3-2 win at Earlsmead and a hard-fought 2-2 draw in front of 1,700 on New Year’s Day at the Huish. Borough fans might have never expected to see a front-two like David Pearce and George Duck again, but Laurence Holmes and Steve Long proved to be a more-than-adequate new version, netting 44 league goals between them, while at the back, the pairing of new skipper Trevor How and Steve Bateman played together in every single league game.

Both the FA Cup and FA Trophy saw what was a regular failing of Harrow in this period: getting a draw away from home only to go out in the replay. In the FA Cup, it was Leyton-Wingate who saw us off, while in the FA Trophy, a draw in the valleys was not converted back at Earlsmead, as Robbie Johnson’s last minute penalty miss saw Bridgend Town go through, 2-1. A decent run in the League Cup (sponsored then by AC Delco) ended with quarter-final defeat by Sutton United, and in the Middlesex Senior Cup, it was a Semi-Final defeat to Hendon.