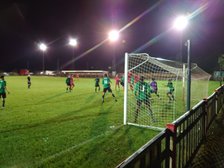 Despite a defeat, there was plenty of encouragement to take for our Under 18s from their first game in the Southern Counties Floodlit Youth League.

Played at Harefield United's Preston Park, the venue for all of their home games, the team was predominantly made up of Ruislip Rangers players - which is exactly why the partnership between the clubs was set up.

They were forced to do a lot of defending in the first half and had goalkeeper Areef Hussain to thank for it being goalless at half time.

Whatever manager Tony Morgan said at half time did the trick, as his team started the second half brightly with some crisp, sharp passing, although they then conceded the first goal.

However, they continued to play in the same vein and took the lead with two goals in the space of a few minutes, both coming from Alex Grant from the right side of the area across the Edgware keeper into the far corner.

The visitors upped the tempo, which was fast and furious throughout, and their extra experience eventually told, as after equalising they scored the winner from the penalty spot.

Despite those setbacks, our youngsters didn't let their heads drop and pressured for an equaliser right until the end.

Our Under 18s next two fixtures have been confirmed as:
Monday 12th September, 7.45pm vs New Salamis (Away)
Wednesday 21st September, 7.30pm, vs Hanwell Town (Home)

Further details of the league (Delphian Division) can be found at:
https://fulltime.thefa.com/index.html?selectedSeason=21851202&selectedFixtureGroupAgeGroup=0&selectedDivision=12549109&selectedCompetition=0