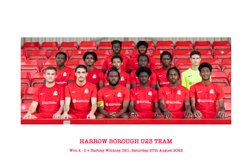 Boro under 23's playing for the first time in five weeks, progressed to the quarter final of the Suburban League Shield.

The players starting off like they were hungry after all the football they had missed. Harrow quickly became the more advancing side with some very good interchanging football which opened up Woking on a number of occasion.

Harrow kept the pressure on creating some glorious chances which unfortunately they were not able to convert.

Eventually the deadlock was broken. Some good play released Marc Charles Smith on the right who played a brilliant cross right across the face of goal and Hayden Brown came storming in at the far post to crash the ball home.

After the break Woking came out determined to try and get a foothold in the game. Harrow came under some pressure from a number of free kicks, but managed to weather the storm.

Ritchie Mbele who was superb throughout the game in midfield sprayed a wonderful pass to substitute Muhammad Selim Asam, with his first touch he delivered and outstanding floated cross, weighted perfectly for the oncoming Marc Charles Smith to volley home.

Harrow continued to create chances with some fine play. Substitute Leandro Jardim, who was making his first appearance since his injury back in September that required knee surgery, finished off the scoring with a near post header after some fine work by another substitute Lemar Griffith.

An all round a great win for Harrow against strong opposition.