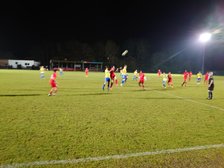 Our youngsters progressed to the Semi Finals of the Suburban League Plate with an impressive win over the league leaders.

There were three changes from the disappointing performance at the weekend with Caleb Mensah, Yasin Ben El-Mhanni and Kamal De Borg coming into the starting lineup.

Borough started brightly and could have gone ahead in the second minute. El-Mhanni and Sam Stuart combined well down the right hand side and the full back’s cross flashed across the six-yard box, just out of reach of Leandro Jardim. However, it was Aylesbury who took the leader after ten minutes. Bournemouth trialist Lovre Dražić was probably disappointed that he didn’t tip Tom Shaw’s left footed shot from the edge of the box away from goal, and Joe Chott pounced on the rebound for a tap in.

Harrow’s reaction to going behind was far better than on Saturday and they were level just four minutes later. Yasin Ben El-Mhanni, who showed some fantastic skill throughout, shimmied away from a couple of defenders on the edge of the box and shifted the ball onto his right foot before shooting across George Zammit into the bottom left hand corner.

Leandro Jardim, who was virtually unplayable at times, had a couple of efforts similar in power to his goal at Beaconsfield, but both went narrowly over. Despite being well on top, Borough went into half time behind after conceding another soft goal. An attempted clearance went high in the air and Remel Larwood handled when trying to control the dropping ball. Dražić got a good left hand to Shaw’s penalty, but it just about found the bottom corner.

Borough continued where they left off at the start of the second half and should have been level just before the hour. El-Mhanni’s clever scoop over the Aylesbury defence put Larwood clean through, but a combination of leaving the ball behind and losing his balance meant the chance went begging. At times Harrow were guilty of overplaying and trying to walk it in, and the healthy away following were beginning to wonder if that could prove costly. But with 65 minutes gone, El-Mhanni’s corner from the right was met at the back post by a Caleb Mensah header. Zammit did well to parry, but Kamal De Borg slotted home the rebound.

Borough, sensing the game was there for the taking, took their game up another gear and were ahead moments later. El-Mhanni rolled the ball into Jardim on the edge of the area and after a clever sharp turn, the forward blasted an unstoppable shot into the bottom right corner.

Jardim was tormenting the Aylesbury centre backs who started to resort to fouling him to stop him. With 15 minutes to go he doubled his tally when he beat Adam Murphy to a loose ball, cut in from the right hand side and scored with a right footer from the edge of the area. Zammit will probably feel that he should have done better after getting a hand to it. A deserved fifth followed when Larwood was put clean through and calmly side footed past Zammit to seal the win. Manager Godfrey Torto gave all of his substitutes a late run out, which contributed to four minutes of added time. The Dynamos were awarded a second penalty when Larwood swung back his foot to clear, but Roshan Patel nipped in front of him and the Borough midfielder caught him on his downswing. One of the home substitutes scored the resulting spot kick and the final whistle blew just after the kick off.

Five goals didn’t flatter Borough and it could have easily been more, and they have put down a marker for the league run in. They should be proud of their performance and some of the slick football they played on another bobbly pitch. Aylesbury may point to needing to make seven changes from their team whom played at the weekend.

Borough’s reward is a semi-final against Yately United Development, which will be played on Saturday 2nd April at Cody Sports and Social Club near Farnborough.